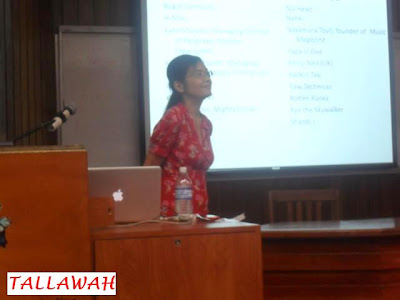 There’s just something about our “tropical music.” For as long as Jamaicans have been exporting reggae music to the four corners of the planet, people like the Japanese have been busy ‘creating’ their own Asian version. Experts believe this occurrence could have started from as early as the mid-1970s, when the Jimmy Cliff motion picture The Harder They Come became an international sensation. Bob Marley’s 1979 visit to also helped, arguably, to fuel reggae fandom. Since then, the reggae scene in has evolved through several styles, cycles and sub-subcultures. But still the quest for authenticity continues, according to Japanese-American Noriko Manabe, Assistant Professor of Musicology at .

The Ivy League academic was a guest of the UWI’s Department of Literatures in English, where she delivered an informative, engaging public lecture, “Locating the Jamaican and the Japanese in Reggae/Dancehall,” on Tuesday. True, Japanese reggae and dancehall performers (like pioneers Nahki, Rankin taxi and Papa U-Gee) have always punctuated their lyrics with Jamaican patois, while channeling the music’s infectious riddims, with Jamaica (and our annual reggae fests) being a vital destination for those truly in love with the music (Japanese reggae artistes are heavily influenced during their visits to the island). But is it just a case of curious cultural interplay. Are most of these Japanese just casual listeners or hardcore fans of the music? Many are drawn to reggae’s messianic themes, according to Manabe, and events like Japansplash, which attracts massive crowds annually is considered the biggest driver of reggae fandom in today.

At the same time, Manabe notes that reggae artistes in make no bones about the perceived similarities (nuances, intonations etc…) between ’s reggae and their Asian brand. And in keeping with some of the myths, some even go as far as to insist that a hefty physique is “the key to an authentic sound.” It bears highlighting though that these days, the Japanese reggae scene is more rude-boy posturing than conscious Rasta ‘livity’. History shows that a lively roots reggae scene flourished in at the dawn of the 1980s but dissolved within ten years. The Jamaican-Japanese scene in is now dominated by pulsating, sweaty dancehall and the commands of the sound system selector. Sounds familiar?

Speaking of which, critics argue that the current dancehall boom in can be aligned with the success of Japanese entertainers overseas and partnerships with current Jamaican headliners. Mighty Crown (known for its spectacular stints at the Yokohama Festival each year) now plays to multitudes in the , and . And who can forget that in 2002 the fearless Japanese dancer Junko Kudo became the first non-Jamaican to win the Dancehall Queen contest in - on Jamaican soil! (Now the largest contingent of international participants in the contest hail from , attired in their batty riders, colourful socks, six-inch heels and long, golden manes.

Meanwhile, the lyrics inherent in Japanese reggae, says Manabe, are largely characterized by humour, occasional political critiques, partying, dancing and romance. Jamaican dancehall is renowned for frequently homophobic content, and this is not lost on the Japanese counterparts, Manabe argues. However, she is quick to point out that is not a homophobic society like . Not even close. Hence, anti-homosexual sentiment is not overt in Japanese reggae. Most Japanese fans object to gay bashing. “In , they feel [sexuality] is a personal matter, and none of their concern,” Manabe says.

Unsurprisingly however, in a country where ‘out’ pop entertainers like Minmi and Ikko enjoy mass followings, Japanese reggae and dancehall acts are keen on avoiding involvement with gay performers. “Most Japanese reggae artistes are sensitive to the taboo issues in Jamaican dancehall culture,” says Manabe. “They see the need to respect the place of or reggae’s original birth by not associating with gay acts.” 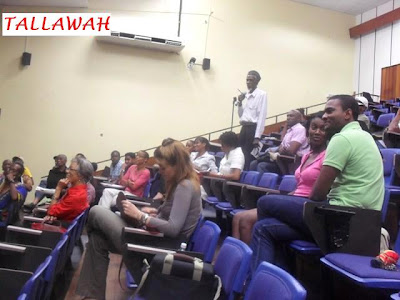 KEEN EARS: A section of the audience at the public lecture at the UWI on Tuesday.

* Reggae Film Festival: Tallawah’s take on the highs and lows