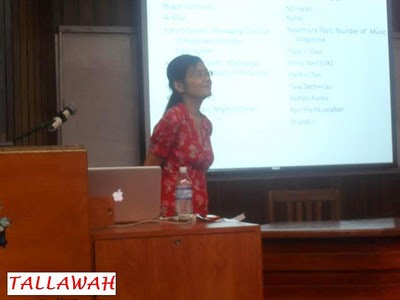 ROOTS & CULTURE: Ivy League academic Noriko Manabe (above), a Japanese-American, recently paid a visit to the island to deliver a public lecture at the University of the , Mona, at the behest of Dr. Carolyn Cooper and the Department of Literatures in English. The musicology professor took the time to clarify a few things re TALLAWAH’s coverage of her brilliant lecture. Here’s Manabe’s letter:

Thank you very much for attending my talk last Tuesday and for taking the time to write your thoughtful review of it on your website. It is most appreciated.

If I may, I'd like to clarify a few little things that I may not have explained well in my talk:

As you note, Japansplash indeed was a great original driver of reggae's popularity in the 1980s and 90s. However, its influence has waned since its founder moved on to other things and another management group took it over. Since the late 1990s, the summer festivals arranged primarily around Japanese reggae artists (like Yokohama Reggae Festival, organized by Mighty Crown) have become more influential than the current version of Japansplash, which is much smaller than what it was in the 80s and 90s. It would be more accurate to say, "Japansplash, which attracts massive crowds annually, is considered to have been the single biggest driver in popularizing reggae in in the 80s and 90s."

While dancehall in is indeed bigger than roots reggae now, as you point out, the roots reggae scene is actually still alive and well; it hasn't disappeared. I've seen some excellent club performances of Japanese roots reggae bands, especially around and . In fact, some acts like Home Grown that perform alongside dancehall acts would actually consider themselves to be more roots reggae. Most Japanese dancehall artists will record 1-2 songs in the "roots" vein on their albums. Several other forms of Jamaican music are actively performed in today—ska, dub, etc. I personally haven't seen any Japanese mento or Nyabinghi drum groups, but it's altogether possible that they exist.

Minmi is actually a heterosexual female singer, not a gay entertainer. She became involved in a controversy because her track was used in a commercial featuring Ikko, the transgender entertainer.

Mighty Crown has won the World Clash in twice and in twice; their first big win was in 1999 in , against Killamanjaro. Outside of among dancehall circles, they may be better known for these victories than for the festival.

Many thanks again for coming to my talk and writing your thoughtful review; I really appreciate it.