USHER and CHRIS BROWN on stage together in Jamaica: The most memorable moment in ‘Sumfest’ history? 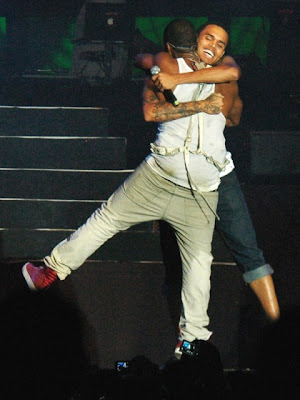 Reggae Sumfest really struck a chord this year. Local pop and R&B fans got a fantastic surprise last Saturday night when two of the world’s biggest entertainment sensations, Usher and Chris Brown, shared the stage and launched into an exhilarating, is-this-really-happening stint alongside Elephant Man that lasted for close to ten minutes. For many in the crowd who witnessed the spectacle at Catherine Hall, it was the most memorable moment of the three-day Reggae Sumfest and the indubitable highlight of International Night II – and probably one of the most memorable in the history of the long-running Greatest Reggae Show On Earth, according to the event’s organizers.

Reggae Sumfest 2010 had no shortage of highlights: Etana, Romain Virgo, Gramps Morgan and Shaggy all gave strong performances, and hosts like Paula Ann Porter-Jones, Richie B and Francois St. Juste brought the engaging banter, especially in between the lengthy band changes. (Don’t even get me started on the long breaks for the band changes). And a few other star-shaped statues could be given out as well to performers like Beenie Man and Vybz Kartel. But the key moment worth remembering was all about R&B’s biggest male stars shining their brightest on stage. Both headliners, Usher and Chris Brown, also reportedly recorded a song at a studio in before they left the island. (Can’t wait to hear that track! I hope it’s nothing disappointing like that silly Alicia Keys-Beyonce duet “Put It In A Love Song”).

What a fitting close their successful trip to ! 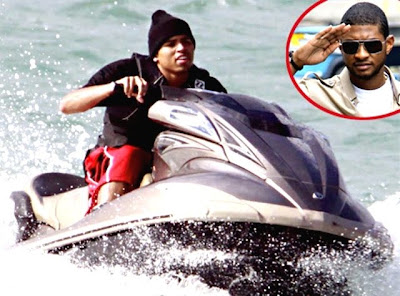 Sidebar/Flashback: Not to throw shade or rain on their parade, but do you remember during the Rihanna-Chris Brown scandal last year, when Chris Brown went out jet-skiing in and Usher reacted to the photos by totally criticizing him with: "C'mon, Chris. Have a little bit of remorse, man. The man's on jet skis? Like, just relaxing in ?"