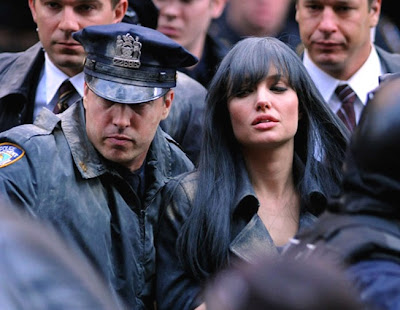 If you signed on to share scenes with Angelina Jolie in a major action blockbuster, you’d better bring your ‘A’ game. Seasoned actors Liev Schreiber and Chiwetel Ejiofore know this, and they prove they are more than up to the task as they hold pace with Jolie in the exhilarating, hugely satisfying action-thriller romp Salt (Columbia Pictures), which had its Jamaican premiere at Carib Cinema in Wednesday.

Jolie, one of Tinseltown’s most versatile (and gabbed-about) screen stars, is in fine form here, with the fate of the film resting squarely on her shoulders. When an actress like Angelina Jolie is able to wow audiences in such Oscar-baiting dramatic fare as Girl, Interrupted and Changeling, and then flip the script to bring the kick-ass badness with summer flicks like Wanted, Lara Croft and now Salt, expectations, understandably, are high when a new project arrives in cinemas.

As the fearless, tough Evelyn Salt, she conveys a grave integrity all the more powerful because it’s so quiet and acute. It’s precisely this trait that has endeared her to fans and directors like Clint Eastwood, who guided her Academy Award-nominated performance in Changeling. In Salt, her piercing, profound quality is again on full display. She peers dead-on into the camera, and it’s like she’s seen deep into your soul.

Evelyn Salt is a CIA operative who is one day accused of spying for the Russians when a ‘defector’ walks into CIA headquarters ready to spill secrets. But is there any truth to what he tells them? Is a secret, dissident Russian sect really out to bring down the and its allies, including the Russian president? To clear her name and find her husband, a German arachnologist, who’s vanished without a trace, Salt goes on the run (in true Van Damme-meets-James Bond style) with the CIA hounds (including Schreiber and Ejiofore) ever nipping at her heels. But who is Salt? Is she really who she says she is? That’s a question the film spends a large chunk of time exploring.

The plot may be a tad far-fetched, but director Phillip Noyce (who previously collaborated with Jolie for 1999’s The Bone Collector) maintains a brisk pace, fast-paced action and frequently mesmeric stunts. The highway chase scenes are particularly riveting. And Jolie is never less than a winning presence. With the story left open for a sequel, I am already awaiting the next instalment of this finely wrought and twisty spy action thrill ride that kept my pulse racing with its thoroughly entertaining formula and genuinely surprising twists. Tyrone’s Verdict: B 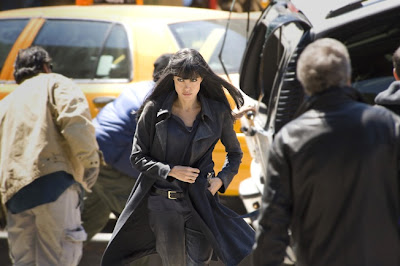