Actress LORNA HAUGHTON gets candid about the theatre, working with the Cartoon Network, and the beauty of family and her homeland 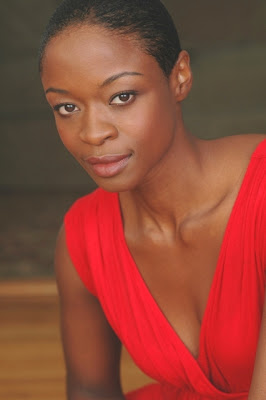 There’s something about actress Lorna Haughton. But what strikes me most about this daughter of the Jamaican soil is her poise, polish and utter composure. Who is Lorna Haughton? She was born in but grew up in Black River, St. , before migrating to the (, specifically) at age 8. She holds a B.A. in French and European History from ’s and and a Masters in International Management from the Thunderbird School of Global Management ().

While pursuing her Masters, she lived in and worked in for a year-and-a-half as a sales and marketing Intern. While living in she traveled quite extensively throughout Europe and and developed “a passion for travelling.” After leaving Thunderbird, Lorna moved to , where she worked in the marketing department of a French pharmaceutical company. There she was introduced to acting classes by a co-worker and was bitten by the acting bug. Since, Haughton has done a few independent films, some TV work and most recently played the lead role Mediyah in the National Black Theatre’s production of Pecong, which also featured Jamaicans David Heron and Karl Williams. Ahead of her August 25 trip to The Rock, Haughton chatted with TALLAWAH.

Why do you act? When did you first fall in love with theatre?

I hear actors talk all the time about that one movie or play they saw that set them on the path to acting. I can’t say I had that. After I left college, I remember a co-worker of mine telling me that I was an ‘artist’ and needed to pursue a career in the arts. I thought she was crazy. I had just left school with a degree in French (language) and European History. I ended up going back to school and getting a Masters in Business, and after graduate school I just jumped on a plane one night and moved to . I got a job with a pharmaceutical company and I remember a co-worker mentioning that she was taking an acting class and I thought, how interesting. I started taking classes and that’s where my journey into the arts began. Why do I act? When I initially pick up a script, a play – I read it strictly for enjoyment. After that, it’s about taking that person’s story, making it your own and sharing it with others. I enjoy that process.


How do you feel about the representation of Caribbean voices in the theatrical arts in the from what you've witnessed over the years?

I’ve met quite a few New York-based Jamaican/Caribbean actors over the past year and have had the opportunity to work with quite a few of them. It’s somewhat difficult for me to speak on how well we’re represented in the as a whole because my theatrical experience so far has been limited to . The fact that I’ve met so many Jamaican actors in the past year though is a sign that our presence is growing.

Are you satisfied with what you've accomplished in theatre already? What's the ideal role you'd like to play?

When I decided to pursue an acting career, I remember a friend of mine, Valentine, telling me to 'enjoy the journey.' I think it's too easy to get caught up in attaining 'success', whatever that may look like, and forgetting to enjoy the moments along the way. That being said, I would say yes, I'm satisfied with what I've accomplished. However, there's so much more that I want to do. I'm not limited to the stage. I would love to have a career that spans film, television and the theatre. I had the opportunity to play Mediyah in Pecong a few months ago, and that was a great role. I wouldn't mind reprising that role.


I hear you also work at the Cartoon Network. What's that like?

Whenever I tell people that I work for the Cartoon Network, no matter what the age, child or adult, it always puts a smile on their face. I really lucked into a great situation. I have a supervisor who is very supportive of my acting career and allows me to do acting projects, take classes, go on auditions, etc. Our studios are located in . My department is focused on Consumer Product Licensing for . I work with a great group of people and for a fun company.

Please share a funny 'Cartoon Network' experience with the readers.

Oh goodness. I don’t know. I think it’s funny that people think my job is so exciting. I work in a pretty corporate environment.


At this stage of your life, what life lessons are you most grateful for?

I spoke to my father a few weeks ago, and he asked how things were coming along with my acting. Right before I got off the phone he said, 'I know it's hard but don't give up yu nuh.' That’s my life lesson.


Importantly, who or what is your main source of motivation/inspiration? Why?

My parents keep me motivated. They have been very supportive of my acting career. They moved back to right around the time that I started performing. Even though they’ve never seen me perform, they always offer words of encouragement and from time to time I’ll receive a card in the mail with some inspirational words.


Any good books you've read lately or reading at the moment? Tell me about it.

I recently read The Forgotten Garden by Kate Morton. It's about a four-year-old girl, Nell, who in 1913 ends up in on a ship from alone, with nothing but a white suitcase. The author takes you on a journey between the past and present, and you eventually discover Nell's story and how she ended up on that ship alone. It was just one of those books that I hated to put down. A great read.


What's your next acting project?

As of right now, I don't have anything lined up. Since my last project, Pecong, I’ve done a few readings of plays and been on a few auditions. I’m currently taking an acting class and I’m working with my acting coach on audition monologues and my audition technique. I do have a few auditions coming up, so we’ll see.


What do you always look forward to most whenever you pay a visit to ?

When I think about , the words family and relaxation come to mind. I generally fly into Montego Bay, and I love that moment when you first view from the plane and you look through the window and see the clear blue water of the . It always gives me a huge rush.

* Shelley-Ann Maxwell: The dancer on the arts, ‘Rex’ and self-worth

* Colin Channer: A conversation with the Jamerican author