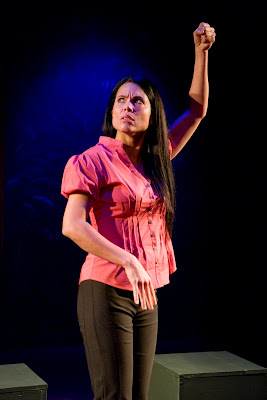 “That’s the great thing about : anybody can have anything if they can get it.”

Hear ye, hear ye: the midsummer’s likeliest hit is playing at the in New Kingston. Debra Ehrhardt’s captivating and hugely enjoyable one-woman show , Farewell is a luminous, sporadically dramatic and frequently laugh-out-loud hilarious production that, despite its shortcomings, showcases Ehrhardt’s wicked wit and willingness to poke fun at the woman in the mirror. Running at 85 minutes (with no intermission) it’s an honest meditation on the life of a Jamaican who decided very early that she was destined for life on American soil – and was determined to make it happen “by the hook or the crook.”

In my experience, it’s not very often that the theatre treats you to a real-life story, told with an intuitive, rhythmic style while navigating inevitable imperfections, even as it transports you through joy, sorrow, paranoia, expectation, disappointment and ultimately hope. But such is Miss Ehrhardt’s fascinating, absorbing account of her coming-of-age and eventful journey from Jamaica to the .

Directed by former TV director Francis Megahy, Jamaica Farewell follows Ehrhardt from her days as a shy, bullied little girl, grappling with an alcoholic father and an overly demure, church-going mother to her phase as a restless, rapidly evolving teenager to her stint as a desperate, forcefully ambitious young adult with one main dream largely driving her life choices: get into America or “die tryin”.

Provided that no exaggerations mark this true-to-life story, Ehrhardt comes across in her vivid storytelling as one determined soul. To fulfil her lifelong wish, she risks incarceration – even rape and death – to carry out a daring, perilous ‘assignment’, with the ‘help’ of Jack, an unsuspecting American she meets. Imagine her glee when she discovers that he is not only a handsome American who can help her in her bid, but he is also a CIA agent with diplomatic ties. What a lucky girl! The unfolding of events that ultimately result in her landing in packs palpable force and is truly something to hear. To say her journey is fraught with obstacles and “turbulence” would be a vast understatement. Fascinating Jamaican place names like Pigeon Town and trying periods like the Michael Manley political era of the 1970s characterize the story.

Despite quibbles (which sometimes felt heightened, since I had to take in the show in not-the-best seat in the house. I won’t go into details), Jamaica, Farewell soars on the merit of the keen, generous eye Ehrhardt casts on her circumstances, capturing the audience with a sublimely engaging personality and undeniable declarations of womanly independence. And while Ehrhardt does not always inflect her performance with glinting expressions of the real depths of her tale, she demonstrates remarkable talent as a writer, possessing a voice that at one point reminded me of fellow Jamerican/ outspoken performance poet Staceyann Chin.

Overall, with its minimal set and compelling material, Jamaica Farewell is a gutsy undertaking, truly, that delivers splashes of nostalgia, warmth and island charm that Ehrhardt will, hopefully, never shed. Tyrone’s Verdict: B+

[Jamaica, Farewell runs at the in New until Sunday, August 15. For more info, visit jamaicafarewelltheplay.com]