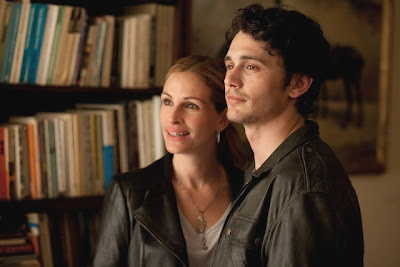 LIFE JOURNEY: Julia Roberts and James Franco have a brief fling in the new film adaptation of Eat Pray Love.

“Ruin is a gift; it is the road to transformation… and we must be prepared for it,” muses Liz Gilbert, in the warm and touching Eat Pray Love, in which Oscar winner Julia Roberts fills Gilbert’s shoes for the Ryan Murphy-directed big-screen adaptation of the bestselling memoir.

Indeed, Gilbert knows all about “ruin.” She bails on her marriage after 8 years and uproots her perfectly normal life to travel the world to find herself. According to Gilbert, she craves change, desperate to refresh her appetite for living and experience a personal, emotional and spiritual cleansing. As the film progresses, however, Gilbert (as portrayed by Roberts) regularly comes across as a confused woman of privilege who complains incessantly and is finding it hard to decide what she truly wants out of life.

For some, Eat Pray Love (Sony Pictures) might be an exercise in shallowness, but the resultant film that Murphy delivers is a largely insightful, occasionally moving and gorgeously shot travelogue that allows viewers to piggy-back with Gilbert to such exotic locales as Rome, Italy (for the sumptuous culinary fare); India (for the soothing tranquillity and meditation); and Bali, Indonesia (to find inner peace and, perhaps, true love). As much as I believe scores of people find it hard to invest in Gilbert as a source of inspiration, it takes incredible courage – and plenty moolah – to pull off what she did.

Murphy’s eye for stunning imagery and Gilbert’s penchant for evocative writing aside, the fate of the film rests on the pert shoulders of Julia Roberts, whom I have increasingly admired as an actress since Closer. With solid support from co-stars James Franco, Viola Davis, Richard Jenkins and Javier Bardem, Roberts gives a fine performance, essentially playing hostess as we travel the globe with her and, too, feel changed as we learn new things about humanity – and ourselves. Tyrone’s Verdict: B