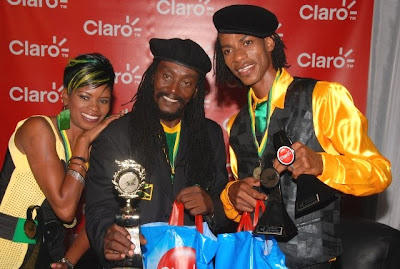 Under a dazzling display of lights and choreography infused with bursts of youthful energy and that ‘ole time Festival’ atmosphere, an energetic Delisser ‘Kharuso’ McFarlane copped the richest prize package in the history of the Jamaica Popular Song Competition, taking home more than 1.1 million dollars in cash (courtesy of Claro) and a brand new 2010 Nissan Tiida motor car (provided by Fidelity Motors) for his winning entry “My Jamaica”.

McFarlane also copped the sectional award for “Best Performer” valued at $40,000 from Capital & Credit Merchant Bank. Meanwhile, other performances deserving of special mention came from Phylbert ‘Petrol’ Graham (right), whose entry “Island in the Sun”, won second place, a prize of $250,000 courtesy of Tastee, along with the Claro ‘Voter’s Choice Award’ (an additional reward of $25,000, a cellular phone and a trophy). The video for Petrol’s entry, directed by Gregory ‘Asha’ McPhail also received the “Best Video” award. A vibrant Salome ‘Nikki Dillon’ Posyer, the only female in the competition, placed third with her entry “Di Land We Love” – collecting $100,000 courtesy of sponsor Real Vibes Party Wine. 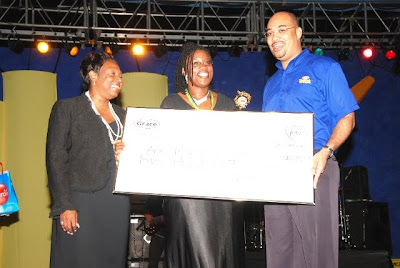 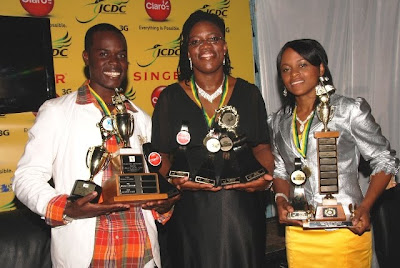 Ann Marie Laing, a music teacher at the in St Elizabeth, demonstrated that her “trust” can win top honours. Last Sunday, Laing copped $500,000 and a recording contract for a single when her entry “I Can Trust God” emerged as the winner of the 2010 Grace Tropical Rhythms Jamaica Gospel Song finals at the Ranny Williams Entertainment Centre in . Laing also took home sectional prizes for “Best Performer” and tied with 2nd place contestant Leroy ‘Ancient Priest’ Johnson for having the “Best Arranged Song”. Laing was also selected by her fellow finalists for the “Spirit of Praise Award” for being the most congenial finalist.

Johnson, who copped $200,000 for his reggae entry “My Prayer”, won the sectional prize for the “Best Lyrics” and took home an additional $50,000 and a trophy courtesy of the Jamaica Cooperative Credit Union League (JCCUL). 19-year-old Tiffany Hall (right), the youngest contestant, took third place for her entry “Lost Without You”, winning $100,000. The “Popular Vote” prize of $25,000 and a trophy from competition sponsor CLARO went to Raylene Lindo (for her entry “I Just Can’t Give Up”), who also won a recording contract for a single.