NOTES ON A SCANDAL: Sex, lies and prejudice collide in David Heron’s sweeping triumph ‘Against His Will’ 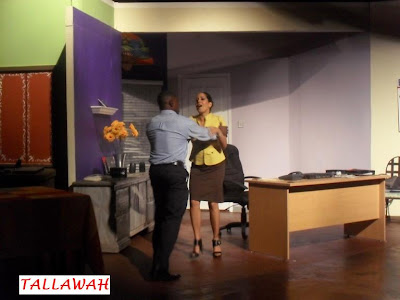 There’s no getting around it: people reject the unfamiliar and are ordinarily more inclined, than anything else, to ridicule it with gossip and laughter. Often forming the crux of things are issues revolving around sex and sexuality. Bringing this point into sharp focus is David Heron’s equally revelatory and provocative Against His Will (centred on a man who brings rape accusations against a woman, his boss), which is finding new life and thrilling audiences at the Theatre Place in New Kingston.

It’s a serious, groundbreaking piece of Jamaican theatre, and this new revival, guided by director Douglas Prout, is an exceptional rendering, prompted by committed performances from a cast of capable actors, who all handle their roles unflappably and with urgency, adding regular colourings of their own. Prout revisits Heron’s solid script with only minor updates, so the play remains in essence a powerful meditation on the justice system, gender relations, sex and family.

Danny Bryan (Jerry Benzwick) is a virile and happily married 32-year-old with a fulfilling job as a computer salesman and a glowing, pregnant wife (Sakina as Heather) at home. With a well-known history as a playboy, Danny is admittedly no angel but seems determined to put his past behind him to make his marriage thrive. But new trouble comes in the form of a “bitch on heels” – his boss, Jillian Forbes (Nadia Khan), a wealthy, attractive and very single woman, with a track record of being astonishingly forward and sexually aggressive with the men she favours. She greedily lusts after Danny, a productive employee, and makes her naughty intentions clear. She flirts and shamelessly pursues him around the office (see photo above) despite Danny’s repeated rejections and pleas for the cat-and-mouse game to end. (Sexual harassment with the roles reversed?!).

When the discomfort on the job begins to overwhelm him, Danny puts up even stronger resistance and demands professionalism in the workplace, but Jillian’s kickin’ sexual appetite is unrelenting. From what the audience gleans, during a drug and booze night at her place, where Danny is summoned one evening to fix a troublesome computer, one thing leads to another – and let’s just say that Jillian finally has her way. However, in the after, in the soughing of the wind, Danny claims to his outraged wife that the sex act was against his will; Jillian raped him. According to Jillian, however, it was a consensual affair. 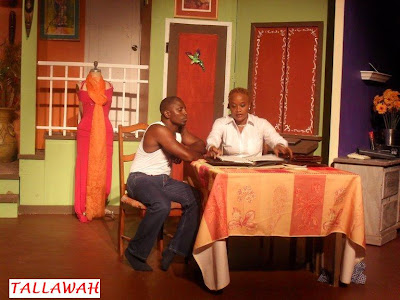 Danny’s subsequent litigation against his employer sets a precedent for the Jamaican justice system as a charge of sexual assault had never before been brought against a woman (by a man), much less capture headlines and provide fodder for radio talk shows and the national suss machinery. And despite the incessant ridicule, Danny presses on, determined to have his justice, even as his home life enters shaky ground. This juncture in the script also introduces new characters -- Danny’s stoic, polished and fast-talking attorney Rachel Robinson (Nadean Rawlins) and Jillian’s legal defense Lincoln Jacobs (Jean-Paul Menou), a sharky, hyperactive and theatrical fellow -- as the stage is set for “Jamaica’s rape trial of the century.”

What Heron invites his audience to ponder is whether a woman can, in fact, sexually assault a man, when the man’s erection is said to imply consent. How will a jury arrive at a decision? Is it really an unwinnable case for the man? However it plays out, prejudice, societal hypocrisy and double standards will certainly characterise the proceedings. The setting is, after all, – not to say that the playground and rules would necessarily be any different elsewhere. In any case, fear, occasional bouts of hopelessness and full-blown anxiety comprise the hallmarks of the proceedings from Danny’s side.

Though taking a time to firmly establish its footing, Against His Will increasingly grows in intensity and emotional heft. Plus, thankfully, the actors get it right. In the central male role, Benzwick’s performance is revelatory and speaks to his innate gifts as an actor as he imbues Danny with rich nuance and emotional transparency. Benzwick has never been better. Equally noteworthy is Rawlins, who after a less-than-stellar stint in House Arrest, is back in fine form, fully disappearing into Rachel Robinson. It’s a role Rawlins was born to play. Despite his frequent see-saw vocalizations, Menou nails the part of the sharky Jacobs. Sakina and Khan also offer some of their best work, particularly their courtroom stints, but the standout performances hardest to shake come from Benzwick and Rawlins (both in centre photo), who utterly give themselves over to their roles. Marguerite Newland appears as the presiding judge.

Meanwhile, I find the set design occasionally problematic, particularly when scenes cut from the ’ living room to Jillian’s and Danny’s offices. Musically, the production goes for the too-obvious choices (Rihanna’s “Rude Boy”? Are you kidding me?). Still, the production makes use of ample stage space, employing simple, effective props and varied lighting as the play builds to a remarkable climax. The dramatic, intense courtroom scenes are really great stuff.

In short, this new revival of David Heron’s Against His Will, one of the best productions so far this year, boasts strong elements for a successful run: a proper blend of high drama and light humour, piercing performances from a cast that carries their weight and a bold, vivid exploration of a subject, however unfamiliar, that should have folks talking (and giggling) long after the lights go down. Tyrone’s Verdict: B+ 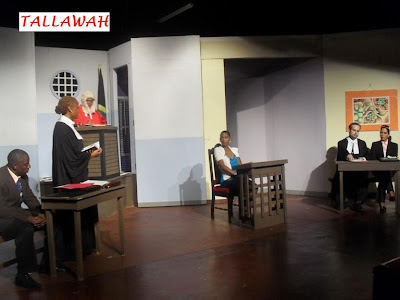 Posted by TALLAWAH Magazine (tallawahmagazine@gmail.com) at 7:44 am