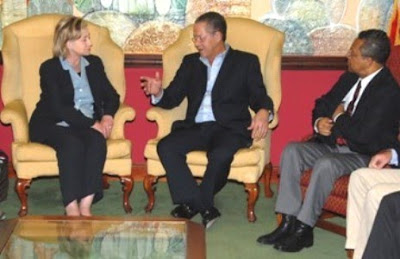 Secretary of State Hillary Rodham Clinton (seen above in a January 16 photo with PM Bruce Golding and Deputy PM Ken Baugh) has expressed her congratulations to on the 48th anniversary of our Independence. Here’s ’s message:

On behalf of President Obama and the people of the , I congratulate the people of on the 48th anniversary of your independence this August 6. We join you in celebrating the rich history and culture of and honouring the many accomplishments of the Jamaican people.

Our two nations are united by our shared history, values, and hopes for the future. We work together through CARICOM to promote regional security and stability, widen opportunity and prosperity, and strengthen democratic governance and the rule of law throughout the Caribbean and across the . ’s contributions to the relief and rebuilding efforts in , as well as its commitment to protecting its citizens, have distinguished your country as a determined and engaged regional partner.

The is a stronger nation thanks to the bonds of family, commerce, and culture we share with . Former Secretary of State Colin Powell is among the many Americans of Jamaican heritage who have shaped our country and made important contributions to the global community. Today, we honour all Jamaicans and celebrate the vibrant friendship between our countries.

On the anniversary of your independence, I offer my warmest wishes to all Jamaicans for a peaceful and prosperous year.