DAVID ARCHULETA: The young music star returns to his comfort zone with polite-pop second album, 'The Other Side of Down' 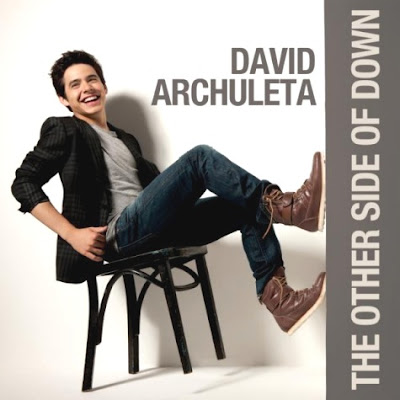 MUSIC OF THE HEART: Pop star David Archuleta returns with sophomore album
Though not as exceptional as his 2008 self-titled debut, David Archuleta’s sophomore album, The Other Side of Down (Jive Records), is a consistently rewarding collection that moves swiftly through 12 tracks, kicking things off with the catchy, spirited opener (the title track) to the eternally optimistic album closer, “My Kind of Perfect,” which serves to wrap up the disc on a heartwarming note.Indeed, ever since his arrival in the music world, fresh from a second-place finish on American Idol, Archuleta has been treating fans with his brand of pleasant, wholesome pop music that stays nestled somewhere between Jason Mraz and Justin Timberlake.

Who can forget his debut smash single, “Crush, “ that sugary-sweet and melodic ode to puppy love, or his equally mesmerizing follow-up track “A Little Too Not Over You,” a soaring, radio-friendly ballad he co-wrote? The Other Side of Down does not represent much of a departure for the talented 20-year-old vocalist, who effectively returns to his comfort zone with well-crafted, beautifully written contemporary pop numbers that tend to fare well on the commercial landscape, thanks in large part to his fanbase of eager teen girls, music-loving gay boys, and those grown folks who can always appreciate a warm spirit, great melodies and even more terrific vocals.

Such themes as unrequited love, heartache, and longing showed up on the first album and, not surprisingly, are back for a second go-round, lacing several singles on the new record. Look no further than the remarkable jazz-tinged first single, “Something Bout Love,” the funky-strutting “Stomping the Roses” or the aforementioned groove-laden title track. You might also be particularly fond of the playful “Parachutes and Airplanes,” the finger-snappy “Look Around” (also from producer Matt Squire) and other iridescent standout cuts like “Elevator” and “Good Place,” both of which show off Archuleta’s voice at its most gleaming.

With gifted songwriters and uber-producers like Squire and repeat collaborator Mike Krompass helping to steer the ship, Archuleta’s sound is crisp and bright, making the singer-songwriter come off more like an incandescent bulb in a tanning bed. Still, though delivering charm and spark, The Other Side of Down offers nothing that depicts Archuleta as a risk-taker. At this point in his career, the singer seems content to play it safe, and considering his young age and promising future, taking it slow and pacing himself on his career path is probably a wise call.

As for the new album, Archuleta (who co-wrote eight of the 12 tracks) proves he has the goods to stay ahead of his class with a take on achingly bittersweet balladry that is quite his own. More to the point, there is no denying the young pop star’s seductive vocal skills and all-around appeal that oozes from the speakers.

DOWNLOAD: The endearing singles “Look Around” and “The Other Side of Down”

Posted by TALLAWAH Magazine (tallawahmagazine@gmail.com) at 9:26 am