FILM REVIEW: Languid morality tale 'Stone' does nothing for its heavyweight cast 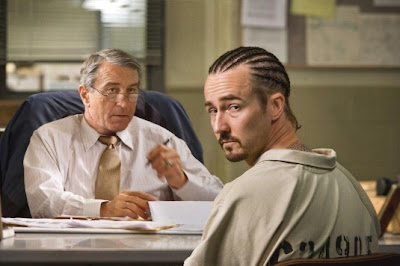 (NOT) ETCHED IN 'STONE': Robert DeNiro (left) and Edward Norton.

It is always disheartening to witness a film that largely squanders the talents of its acclaimed actors. Case in point: Director John Curran's Stone, a laborious faith, morals and prison saga that wastes too much time talking the talk instead of walking the walk. Cinematic great Robert DeNiro plays Jack Mabry, a veteran parole officer looking towards retirement. Before his exit, though, he is assigned to review the case of a convicted arsonist played by Edward Norton. As prison official and prisoner become increasingly enmeshed in each other's lives, they also become entangled in a game of wits, with each trying to get the upper hand against the other. Both actors attempt to act the hell out of the roles; it's just too bad the hammy, preachy script doesn't offer them incisive dialogue, the sort of gripping verbal exchanges you expect to effectively ratchet up the dramatic tension as prisoner and parole officer zone in on each other's emotional weaknesses. Consequently, before long, you begin to lose interest to discover who's the really more despicable of the two creatures. In equally thankless roles, Frances Conroy and Milla Jovovich play their long-suffering women. Tyrone's Verdict: C-

Posted by TALLAWAH Magazine (tallawahmagazine@gmail.com) at 9:48 am