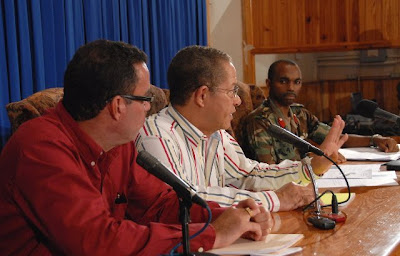 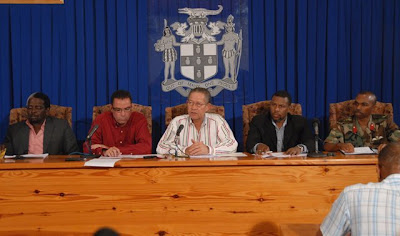 Prime Minister Bruce Golding has given the assurance that the security forces have been mobilized to secure life and property during the passage of Tropical Storm Nicole. He was speaking at a press conference at Jamaica House this afternoon, September 29. Updates on the damage and the role of disaster agencies and related Ministries were also given at the conference. From l-r are Labour and Social Security Minister, Pearnel Charles; Information Minister, Daryl Vaz; Executive Director of the Office of Disaster Preparedness and Emergency Management (ODPEM), Ronald Jackson and Jamaica Defence Force’s Col. Rocky Meade. 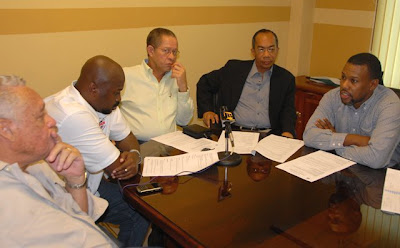 Executive Director of the Office of Disaster Preparedness and Emergency Management (ODPEM), Ronald Jackson (right), briefs Prime Minister Bruce Golding and other government officials at an emergency meeting that was held at ODPEM this morning, September 29. Jackson advised that emergency shelters were being opened in areas that are expected to be flooded as a result of Tropical Depression #16 which is currently affecting the island. From left: Minister of Transport and Works, Mike Henry; ODPEM Deputy Director, Richard Thompson; Prime Minister Bruce Golding, Minister of Water and Housing, Horace Chang.