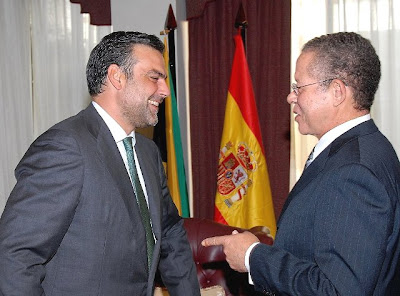 TILL WE MEET AGAIN: Outgoing Spanish Ambassador to Jamaica, Jesus Silva, seen here at Jamaica House, when he paid his farewell courtesy call on Prime Minister Bruce Golding on Tuesday, officially ending his 5-year tenure in the country. PM Golding said no one could dispute or undervalue the significant contribution which the outgoing Ambassador has made. “The passion and exuberance which you brought to your post, has resulted in stronger relationship between our countries,” Golding noted. 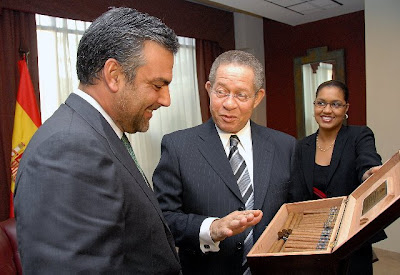 THINK OF US: Prime Minister Bruce Golding shares a parting-gift moment with Silva, when the ambassador paid his farewell call on the PM at Jamaica House on Tuesday. Mr. Golding credited the growth of the relations between , and the entire to the fervour and enthusiasm with which Ambassador Silva approached his work throughout his 5 years here. Looking on, at right, is Permanent Secretary in the Office of the Prime Minister, Onika Miller.