ON THE MAGAZINE RACKS: ETANA opens up about music and romance to ‘Riddim’ + ZIGGY MARLEY talks reggae, marijuana and new comic book with ‘Culture’

A HERO COMES HOME: Grammy winner Ziggy Marley is taking on the world of comic books with the introduction of his very own superhero, Marijuanaman. But this superhero has no designs on saving the planet; his primary objective is to educate about the wonders of cannabis. “[The comic book] is coming along good. It’s a concept [designed] to educate people about the plant and using it as a resource beyond just the medical purposes. There are many more beneficial uses,” Marley shares in the latest issue of Culture Magazine. In the interview, Marley also fields questions on the medical marijuana movement, the lasting relevance of reggae music around the world, and releasing new music online via his new Wild & Free singles series. Asked if these new tracks are indicative of the creative direction of his next album, Marley explains: “No. I thought so at the beginning, and I was trying to figure it out, but it is not letting me do that. Each song is totally different. I am going to get there, though. It’s also about involving friends and seeing what they say and think and to see what the next songs are going to be like. It’s an experiment, and I don’t have [a] formula yet.” 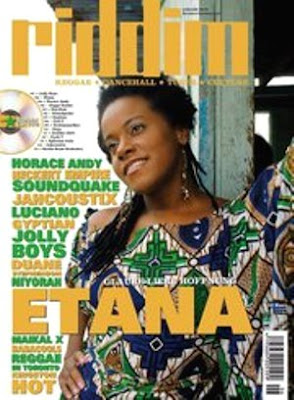 JOY & HAPPINESS: In the wake of a clandestine marriage and increasing pregnancy rumours, Etana is finally talking – and setting the record straight. In a revealing six-page cover interview, the reggae singer-songwriter opens up to the foreign-based Riddim Magazine, reportedly sharing intimate details about her personal life as well as her ever-evolving music career. I’m certain her fans in Germany, Austria and Switzerland, where the mag is distributed will appreciate the juicy tidbits. Meanwhile, fresh from concerts in France, Italy and the Scandinavian territories, Etana is looking ahead to touring dates in North and South America, as part of the promotional schedule for her keenly awaited sophomore album, Free Expressions, which has been pushed to an early 2011 release.