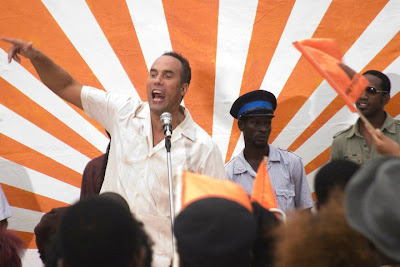 Though appearing in only a few brief scenes, Roger Guenveur Smith gives a standout performance as a hard-wired politician campaigning for support in Better Mus’ Come, the buzzworthy new Jamaican film from writer-director Storm Saulter that arrives in cinemas islandwide today. Here, the 55-year-old American stage, TV and film actor talks briefly about his part in the film and its place in Jamaican history and the world of indie cinema.

What initially drew you to that politician character upon reading the script?

He is a charismatic figure with internal conflicts.


What did you find most challenging in your quest to fully nail the role?

To inspire a crowd of strangers, not unlike the character's challenge.


What has been the most rewarding thing about the whole Better Mus' Come experience?

Collaborating with a dedicated and talented new generation of filmmakers.


The filming seems like it was pretty strenuous? How did you find it, looking back?

It was well worth the struggle.


What are your thoughts on the place Better Mus' Come is poised to take in the world of independent cinema?

This is an important film that's being released at a crucial juncture in Jamaican history, which has both polemic and artistic value.


What do you hope viewers take away after seeing the production?

To meditate on the violent resolution of conflict and seek an alternative.