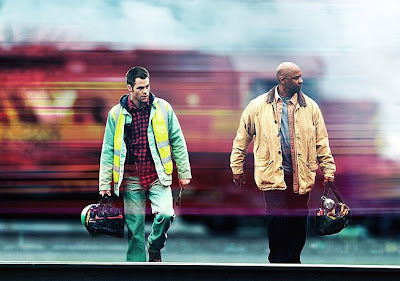 TWO FOR THE ROAD: Washington and Pine are men on a mission in Unstoppable.
Denzel Washington has covered the selfless, big-hearted hero territory before in numerous films, but for Unstoppable (20th Century Fox) he brings a certain headstrong guise, screen veteran appeal and winsome fatherly charm to Frank Barnes, a long-serving railroad engineer on the brink of forced retirement. Terrifically entertaining and laced with relentless, heart-pounding entertainment that keeps you on the edge of your seat, Unstoppable ranks high among Washington’s most enjoyable action-dramatic outings and is easily one the best film productions of the year.

Pairing the actor with director Tony Scott for their fifth collaborative effort, Unstoppable relates the story (based on true events) of Barnes, a single father of two, who is driven to selfless heroics by the discovery that an out-of-control power train laden with deadly chemicals is barreling its way towards a densely populated small town in rural Pennsylvania; a tragedy of epic proportions waiting to happen. It is an especially weighty circumstance to which Barnes and his rookie conductor sidekick, Will Colson (played by Star Trek’s Chris Pine) respond with admirable zeal. As with several of Scott’s previous releases (Taking of Pelham 123, Man on Fire), events in Unstoppable often unfold at such a zippy, high-wire pace that you sometimes hardly have time to catch your breath.

Though the plot is a bit thin on the meat, there is nothing here to diminish the satisfaction. Scott may be a deft master at staging spectacular, jaw-dropping stunts, but he’s equally adept at drawing strong performances from his actors. Washington turns in a characteristically robust performance, even as he demonstrates that for a man of his age he can still meet the rigorous requirements of an action-adventure role.

Pine commendably keeps pace with Washington, as Rosario Dawson makes her presence felt as Connie Hooper, the tough shot-caller at the railway control room under whose watch the runaway train saga is unfolding. Kevin Dunn rounds out the cast as Hooper’s desperate boss, Galvin. All in all, it’s a fine batch of actors doing some of their best work under a director refreshening his cinematic mojo behind the camera. Packed with nonstop thrills and a straight-to-the-heart-of-the-matter script, Unstoppable is a taut, thoroughly entertaining thrill ride. Tyrone's Verdict: B+