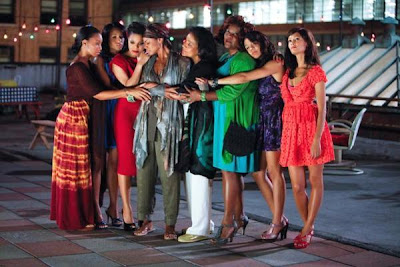 SISTER COURAGE: The cast of Tyler Perry's For Colored Girls

Somewhere around the middle of the new film For Colored Girls, a character muses that to be sorrowful and colored in the modern world is a state of redundancy for women. It’s a rather provocative observation made all the more haunting by the fact that it comes in a film that forcefully and unremittingly examines Black female oppression, identity, abuse and a vast range of themes steeped in depression. But the nature of the film is hardly a surprise, taking into account that it is Tyler Perry’s silver-screen adaptation of Ntozake Shange’s award-winning and revered 1974 theatrical piece for colored girls who have considered suicide when the rainbow is enuf, considered The Holy Grail of rite-of-passage pieces for any Black actress worth her salt.

When word got out last year that Perry was gearing up to bring Shange’s magical words and vision to the screen, the collective concern was how could he possibly pull it off, when Colored Girls is essentially a series of poems and monologues originally intended for stage performance. It’s a challenge that could have daunted a filmmaker less committed to a project of passion than Perry. But the result speaks volumes. It’s an emotional, empowering and observant rendering of the stage work that is not without flaw but is so gripping and unrelenting that you are tempted to overlook the regular splatters of dark melodrama and the sometimes awkward injection of Shange’s monologues into the screenplay. Still, Perry successfully weaves the interconnected stories into a compelling whole, equal parts intense and humorous, sobering and sorrowful.

The stage piece was penned for seven actresses, each assigned a metaphorical colour. For his film, Perry adds two additional voices to bolster the ensemble, an assembly of fine, accomplished actresses led by Janet Jackson (as the icy magazine editor, Jo) and Kimberly Elise as her timid assistant, who must cope with the demands of her boss at work and the vicious physical abuse of her alcoholic lover (a pudgy Michael Ealy), the father of her two adorable kids, at home. Kerry Washington (Mother and Child) returns to familiar territory as a social worker desperate to experience motherhood, while Anika Noni Rose puts her grace to good use as a sweet-natured dance teacher who experiences a shocking act of violence.

Then there’s Loretta Devine as a caring nurse fed up with her inconsistent lover and Whoopi Goldberg as a zealous warner-woman whose angry older daughter played by Thandie Newton is fiercely antagonistic towards her misguided younger sibling (Tessa Thompson). There is a fleeting cameo from Macy Gray, while Phylicia Rashad appears as the nosy but nurturing manager of the rundown apartment complex where several of these women live. Such a large cast can make it difficult for individual performers to shine, but there are particular standouts in Elise and Newton, who offer the most believable acting. These women, notably Elise’s Crystal, endure such difficult trials that you easily recall last year’s Oscar darling Precious.

While I remain confident that it wasn’t remotely Perry’s intention to depict Black men in a harsh negative light, For Colored Girls perches precariously on all-out male-bashing; with the exception of Hill Harper (as a probing cop), the men portrayed are insensitive users and abusers, who are at their best when they wrong the women in their lives. Roles played by Khalil Kain and Omari Hardwick, especially, are acutely observed as such.

But For Colored Girls is an important work about the female experience, and there is authenticity in the actions of men – and women – as shown in the film. Even more to the point, as one female blogger asserts, “The movie truthfully and tastefully showcases hardships women go through on the daily. So if the movie slightly affects how black men are perceived, then so be it.” Tyrone’s Verdict: B