JAMAICA HOUSE SPOTLIGHT: Out and About with PM Bruce Golding 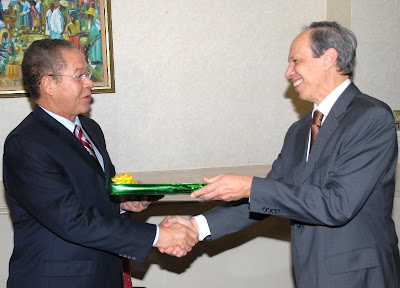 His Excellency Alexandre Ruben Milito Gueiros presents a gift of appreciation to Prime Minister Bruce Golding when he paid a call on him the morning of Thursday, November 18 at Jamaica House to bid farewell. The outgoing Brazilian ambassador paid tribute to the leadership role that Jamaica played in the region which contributed to the success of his mission and to improved technical co-operation between Jamaica and Brazil. The ambassador will take up a new assignment in The Netherlands. PM Golding said he was particularly pleased with the establishment of the centre of excellence which he said got off to an impressive start and that efforts would continue to establish a mission in Brazil. 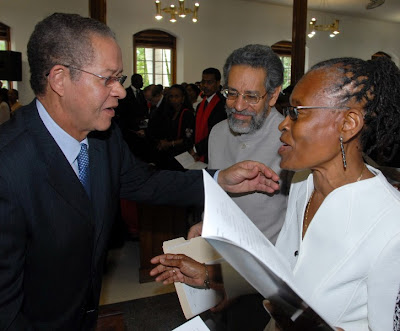 Prime Minister Bruce Golding greets widow of Professor the Hon. Barry Chevannes OJ, CD, Pauletta, at the funeral service to celebrate Chevannes' life and legacy on Monday, November 15, at the UWI Mona Chapel. Professor Chevannes was awarded the Order of Jamaica (posthumously) at a special function last Friday at King’s House. In his address Prime Minister Golding said the work Chevannes had performed made him an icon who has left a legacy that everyone must treasure and work hard to build on. 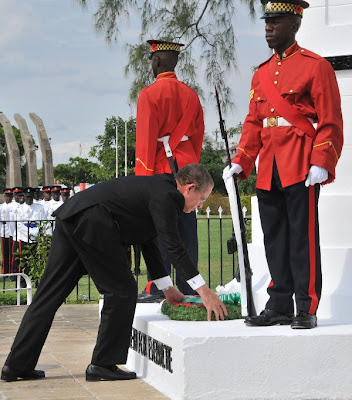 Prime Minister Bruce Golding was among those who laid wreaths at the shrine of persons who fought in the great wars during National Remembrance Sunday on November 14 at the National Heroes Park in Kingston. The day is traditionally observed on the second Sunday in November and is used to celebrate those who gave their service and ultimately their lives in World Wars One and Two. On November 8, 1915, the first Jamaican contingent, under the command of Major W. D. Neish, was sent off to serve in the First World War. On that day, 500 men sailed slowly off into the unknown looking for adventure, a chance to serve God and country. Last Sunday paid tribute to those who never returned, as well as those who survived, some of whom were able to turn out for the ceremony and were greeted by Governor General Sir Patrick Allen. Prime Minister Bruce Golding (centre) enjoys his time with the 2010 youth mayors during their courtesy call on him on November 17 at Jamaica House. Minister of State with responsibility for Local Government, Robert Montague (third left), presented the youth mayors to the Prime Minister. The youth mayor programme is an annual activity of the Department of Local Government in the Office of the Prime Minister. Among its objectives is to make Jamaican youth more aware of the operations of their parish divisions, councils and municipalities. Youth councillors are nominated by their division councillor. At their parish youth council they participate in debates from which a mayor is selected. The current batch of youth mayors will serve until October 2011.