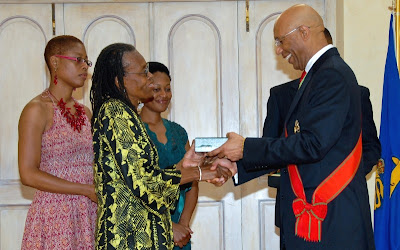 The Governor-General, His Excellency Sir Patrick Allen, presents the Insignia of the Order of Jamaica (Posthumous Award) for social anthropologist Professor Barry Chevannes to his widow Pauletta Chevannes at Friday’s special ceremony at King’s House. The ceremony was also attended by Chevannes’ daughters Amba (left) and Abena and close friends. 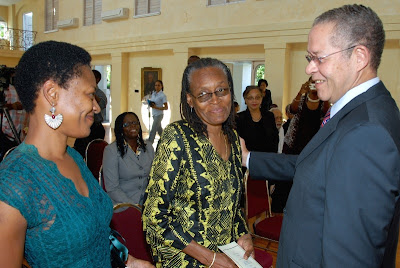 Prime Minister Bruce Golding greets Pauletta Chevannes (centre), widow of the late Professor Barry Chevannes, at Friday’s special ceremony for the presentation of the Insignia of the Order of Jamaica (Posthumous Award) for Professor Barry Chevannes (CD) at King’s House. Sharing in the moment is daughter Abena (left). The late Chevannes was given the honour in recognition of his contribution to research, academia and the preservation of Jamaican heritage. Chevannes passed away at the University Hospital of the West Indies on Friday, November 5, after a prolonged illness. He was 70.

Posted by TALLAWAH Magazine (tallawahmagazine@gmail.com) at 11:59 am