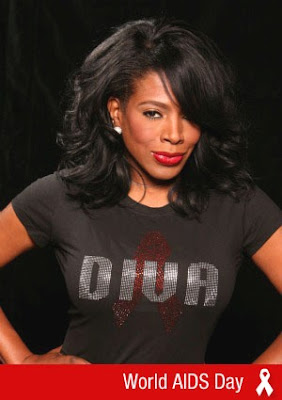 Today we acknowledge the 22nd World AIDS Day. Funny how quickly the time flies. It seems like just yesterday I was a fresh-faced kid from Long Island, by way of Connecticut and Jamaica, with a flair for fabulosity, making my Broadway debut as an original company member of Dreamgirls. (Actually, I made my Broadway debut in one of two flops too disastrous to mention and therefore I rewrite the facts to suit myself.)

I made my debut on December 20, 1981 - the same year that five men with mysterious symptoms in a San Francisco hospital sent the whole world into shock and the dying began. Up and down Broadway, men were dropping dead and with each sudden death came the deadly silence. I stood witness as that disease blew out the creative flame of life on Broadway like candles on a birthday cake.

It was definitely the best and worst of times for me as I watched too many of my friends die under stigma, shame and silence. Nobody wanted to talk about "that disease" much less do anything about it. "SHHHH! We don't talk about THAT disease!" But in that silence I found my voice on HIV/AIDS. I founded the DIVA; Divinely Inspired Victoriously AIDS Aware Foundation in memory of the many friends I had lost to AIDS, a cause that many told me was a waste of my time. A cause that would not help me further my career. I remember how so many people called me a fool and refused to help me simply raise awareness about HIV/AIDS and the threat I felt it held for women.

I always thought that if sex could be a problem for men, then women couldn't be far behind. People were not shy about telling me to shut up with that crazy talk. But the years have passed and I have watched the face of AIDS change, as it spread across the world with deadly consequences. I am deeply saddened to see that millions of people continue to be infected with HIV every year and less and less is being done to help those most in need. HIV/AIDS has become feminized and grows younger and younger. Women and children locally and globally are bearing the burden of this disease.

Knowing your status is powerful. The number one reason most people in America don't tell people they have HIV is because they don't know it. Visit testtogether.org and put in your zip code to find a test site near you - many of them are free. We know that getting tested for HIV/AIDS really works and more people need to do it. Remind people that HIV has not gone away, and that there are many things still to be done.

We know that a disease that is 100% preventable is silently set to become a major cause of death for people all around the world. According to UN AIDS estimates, there are now 33.3 million people living with HIV, including 2.5 million children. During 2009, some 2.6 million people became newly infected with the virus and an estimated 1.8 million people died from AIDS. We know that American women, especially women of colour, are becoming infected in numbers that are unacceptable and too many do not have access to adequate care services. We know the facts and the reality but what are we going to do about it?

Breaking the deadly silence still attached to HIV/AIDS will take the involvement and assistance of people around the world, small nations and world powers, organizations, state and local governments, elementary, high school and college administrations, churches, mosques, synagogues and many others. We must all encourage people to speak up, volunteer, get involved and get informed. Armed with proper information, we can combat the spread of this disease together. We must acknowledge the need for better health care for everyone, including the sex worker and intravenous drug user. We must protect everyone's human rights especially those who are stigmatized and marginalized.

I know HIV/AIDS is a difficult subject for people to address, but through my life experiences I have seen that extraordinary things happen when ordinary people decide to make a change. We must see a change in the way the world views AIDS and those infected and affected because AIDS affects us all! And all of us must do something to affect change. It's hard to remember a time when people died in numbers too great to imagine and families turned their backs on loved ones dying in silence, stigma and shame. It's hard to remember but I will never forget.