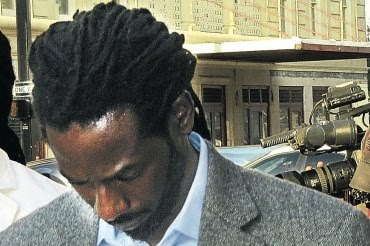 The verdict is in. This afternoon, before a packed courtroom, a 12-member Florida jury found Grammy winner Buju Banton guilty on three drug-related charges as the drug conspiracy and firearms trial of the embattled reggae star came to a climax after more than 12 agonizing months. The 37-year-old entertainer, born Mark Myrie, was found guilty of the following:

He was, however, found not guilty of attempted possession with the intent to distribute cocaine. Following today's revelation, Banton's lawyer David Markus (above) told reporters outside the courthouse that "obviously we are very upset and disappointed" with the turn of events, before making it clear that the fight is far from over, signalling an intent to appeal. Banton, in the meantime, has expressed gratitude to his fans and supporters for remaining in his corner, as he now awaits sentencing. Sentencing will reportedly be handed down within three to six months.

In the meantime, over on social networking site Twitter, the reactions from several members of the Jamaican music industry were swift and vastly similar. Here are a few:

Singer Gramps Morgan (@grampsmorgan): My heart is in so much pain right now buju the fight continues don't stop praying!!!

Singjay Mr. Vegas (@MrVegasMusic): Sadddddd day in music!!!!! Jury found buju guilty. This is a message to all of us as entertainers.... Make music, entertain and don't get mix up....

Singer Natel (@Natelmusic): Keep praying for Buju Banton ... The case is finished but life goes on!!!!! Dont give up on him because there is more to his life than a court room...

Speaking this evening to TV J News, reggae veteran Tony Rebel had a bit of advice for his younger contemporaries and up-and-comers in the biz: "...Just know say that not because you're popular, have money or hit songs, you still have to be careful, because things that you do can come back to haunt you. Let us have Buju Banton as an example."