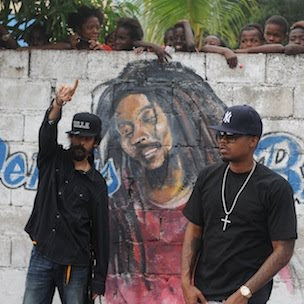 WHEN WE WERE KINGS: Never failing to thrill their loyal fans, industrious entertainers Nas and Damian Marley have dropped another smash single and video, the hypnotic "Patience," (one of the dopest tracks) from their acclaimed collaborative opus Distant Relatives. The four-minute video clip, directed by NABIL, is a visual feast for the eyes, complete with mesmerizing graphics, majestic depictions of early African civilization, breathtaking shots of Mother Nature in her glory, and the protagonists depicted as handsome kings draped in royal garbs.

In the meantime, Nas and Damian are back on tour, recently performing in Hawaii before heading Down Under. On Thursday they tweeted, "Leaving Hawaii... On our way to Australia and New Zealand!!

Watch the video below:

"The earth was flat if you went too far you would fall off. Now the Earth is round if the shape change again, everybody woulda start laugh."