FOR THE RECORD: Rising reggae star Protoje puts in the overtime on debut album, 'The Seven Year Itch' 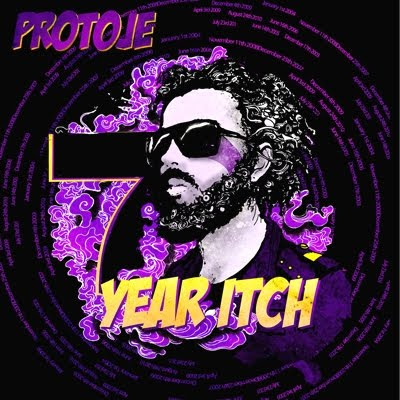 With such abundant inspiration and talent at your disposal, it’s hard to go wrong. Not the least bit surprising therefore that rising reggae disciple Protoje kicks things in overdrive in time for the release of his long-awaited first solo album, The Seven Year Itch, a terrific release that packs much social interpretation, meaningful introspection, remarkable worldly observance and lyrical potency into 13 tracks. It’s a buzzworthy if not brilliant release that draws on the young entertainer’s penchant for provocative lyricism, patriotism and mad respect for the healing and meditative properties and power of the weed.


The man behind such increasingly popular hits as “Dread” and “Arguments” doesn’t switch things up too much here, wisely relying instead on his tested and highly successful formula to reel in listeners. He brings a sense of coherence and consistency to the record, and the songs have a familiar feel of conversations with a bredrin on roots, love and livity. Production wiz Don Coreleone imbues the bulk of these tracks with a compelling magnetism, which only serves to heighten Protoje’s impassioned delivery.

Hints of rootsy reggae, throwback dancehall and world music inform the proceedings, giving the alternately gritty and sharply lyrical songs a satisfying glow. I am particularly impressed by the appealing “Overtime,” a gleaming boomshot track, which finds me hitting the repeat button successively. Then there’s the bravado-drenched “Roll,” on which the artiste propositions a young lady who strikes his fancy, before making a patriotic pledge on “JA,” which should find favour with listeners of a gapingly wide cross-section.

As far as collabos go, Protoje recruits singer-songwriter Jah9 (a gem on the live music circuit) for the evocative “After I’m Gone” while Gentleman shows up for reflective “Growing Up.” Best of all, however, is “Rasta Love,” his stirring ode to unconditional love (featuring a vocally superb Ky-Mani Marley), for which he recently dropped a wonderful music video.

Though the album ends a bit too quickly (perhaps due to its brisk pace), you can’t deny the amazingly rich listening pleasure it offers, while spinning potent tales generously laced with heapings of yearning, fervour and indisputable evidence of Protoje’s natural defiant streak, even as it presents a window into the mind and soul of one of reggae’s fast-rising and attention-worthy musical rebels. Tyrone’s Verdict: B+