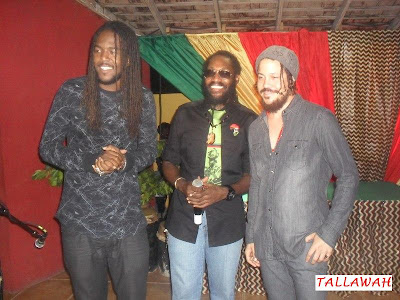 
Golden-voiced reggae crooner Tarrus Riley takes his ever-luxuriant vocals to new heights with the release of his appealing new single (and accompanying music video) “Shaka Zulu Pickney,” which had its official premiere last evening at the Pulse Complex, Trafalgar Road in New Kingston. A sizeable turnout was on hand to witness the premiere. Directed by Storm and produced by Bay-C (T.O.K, Bombrush Records), the song is immediately a salute to the rich African lineage of Jamaicans, and Riley is ever-eager and all to happy to spotlight and celebrate that.

As for the video, Storm (the filmmaker behind Better Mus’ Come) peppers it with stark images, including setting traditional tribal African dress against the modern-day rush of New Kingston and its environs. There are warriors, fire-eaters, vibrant drumming, and multiple cameos, and its made all the more compelling by Riley’s lyrical verbosity. Speaking with TALLAWAH at the launch, Riley explained that for him the new video is about honouring “our African roots and ancestry.”

Meantime, the arrival of such a provocatively Afrocentric piece of work ties in beautifully with the dual ongoing observance of Black History/Reggae Month. And, as if to further bolster this awareness, Riley seized the opportunity at Tuesday’s launch to announce his inaugural “Freedom Writers Competition.” According to Riley, it’s a poetry and essay contest that he’s running this month, open to youngsters ages 13 to 17, and requires that they submit works that explore African history, the life and work of their favourite hero(es) and/or Black revolutionaries. The main prize tentatively selected is the chance to record a brand new single. More to be announced later.

In the meantime, check out the stunning visuals of “Shaka Zulu Pickney” below: