LIFT EVERY VOICE: Howard University Choir restores your faith in the power of the Negro spiritual 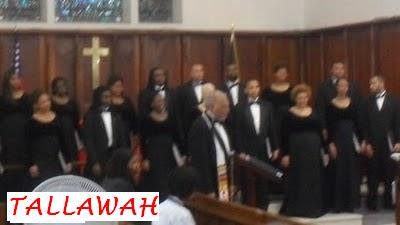 
The acclaimed Howard University Choir performs almost entirely without musical accompaniment. With this in mind, one can be led to believe that at some point their 90-minute acapella concert will morph into a monotonous, tedious bore. For a lesser experienced group this could easily come to pass, but the Howard choir is far too skilled and expertly guided to fall prey to such a risk. If anything, the absence of musical backing forces the choristers to yield luxuriant vocal registers in capturing and transporting the audience. And so it was when I took in the choir’s recital at the Mona Chapel, one of the three concerts they gave in the island at the invitation of the United States Embassy recently.

Delivering a tightly run programme of American hymns, spirituals and slave songs, the performance was a study in precision and control. And despite the occasional burst of titanic vocals, for the most part the black-and-white clad group offered meditative and evocative selections, opening with Randall Thompson’s slow and meandering motet “Alleluia.” And though their take on the New England folk hymns When I Can Read My Title Clear and Hark, I Hear the Harps Eternal also came in for extended applause, the choir never truly had the audience in its thrall until they switched the focus to the music for which they have earned fame: the authentic Negro spiritual, in the words of their celebrated director Dr. J. Weldon Norris.

It was pure bliss, a timely reminder of the singular and enduring power of the Negro spiritual to thrill and touch profoundly. Simply excellent. Most notable among the selections were R. Nathaniel Dett’s As By The Streams of Babylon, which thrived on a gorgeous solo from soprano Angella Wray, and Samuel Barber’s tranquil strings-and-choir piece Adagio, Opus 11, during which a local string quartet provided the evening’s sole musical flourish. When the male chorus later took over to perform work songs, “popular throughout slavery,” we were in for a real treat thanks to the humour and sheer delight of Keep A-Inchin’ Along (decidedly tame) and I Got A Mule (more forceful delivery), not to mention the bits of relationship logic to the men (“If you want to be happy and live a clean wife, marry a woman that’s uglier than you”).

By the time the choir wrapped up the show with lingering takes on “Soon Ah Will Be Done” and “Plen’y Good Room” I was sold on the excellence of the group, which has reportedly performed at the White House for every US President since 1974. Like our very own University Singers, it comes out in their beautiful singing that they have garnered a mastery of their repertoire – and genuinely earned their laurels. And their long-serving leader (since 1973), Dr. Norris, strikes me as an affable statesman of music, one who lives and breathes the craft. “The spiritual is our heritage,” he told the packed Mona Chapel. “As long as I’m at Howard, the Negro spiritual will never die; they are just too beautiful.” 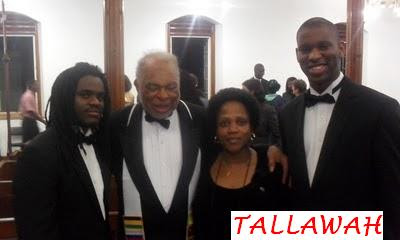 LEND ME A QUARTET: Director J. Weldon Morris with a trio of his choristers following the stirring performance at the Mona Chapel.