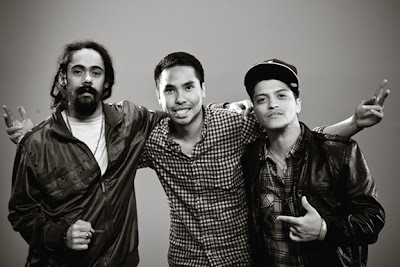 High-riding R&B-pop star Bruno Mars has followed up his recent win at the 2011 Grammy Awards (Best Male R&B Vocal) with the release of a vibrant new video for his Damian Marley-assisted instant hit "Liquor Store Blues," the third single off his widely praised debut album, Doo-Woops & Hooligans -- and one of my top five fave duets of 2010.

The clip (which was shot from last October) was directed by Nabil, who did equally superb work on Marley's recent collabo vid "Patience" with Nas, off their Distant Relatives project. Mars, in the meantime, has a packed touring schedule, including sold-out concert dates across Europe, while Marley and Nas are still hitting cities globally in support of their joint album.