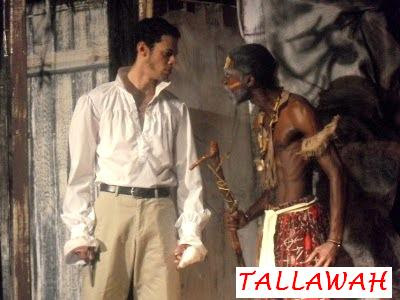 Reader (via email): White Witch?! The play where only the whites had any sense and the Blacks were buffoons?! This is a sad commentary.
Me: Not necessarily true. The Blacks were an oppressed set who ultimately led a successful coup against their tormentors to re-write history. The production won for its sheer delightful entertainment and exceptional acting.
Reader: Well - I saw it - technically good - racially offensive.
Me: I think you just game me an idea for my next article. Thanks. Hope you don't mind if I use your quote, just for context. I think it's something worth exploring.
Reader: No no, Tyrone - this is a private conversation - don't use my name if you quote me! Take care now.
Me: Ok, no names.
Is it at all possible to dip into the annals of slavery to depict the true character of the era without the issue of racism coming into play? Granted, it was an ugly period, especially for our Black forebears, who toiled like beasts-of-burden at the behest of their white superiors. But it’s safe to conclude that highlighting such events in a theatrical production, a la White Witch, is to show the true nature of life for our ancestors back in those days.

Earlier this week when an avid reader (an influential columnist who requests anonymity) brought to my attention the opinion that while White Witch is “a technically good” production, it portrays the Whites as sensible but pitches the Black characters as “buffoons,” I was sent musing on the trickiness of art. Though not always the primary intent, art has the dual effect of inspiring some while offending others.

In the case of White Witch (centred on the life and romantic misadventures of Annie Palmer of Rose Hall) as a work of artistic excellence it is a thoroughly thrilling production bolstered by tour-de-force acting, a solid script and a frequently stirring score. And though the musical is not without flaw, I certainly didn’t find it racially offensive. The Blacks (slaves) who might have displayed signs of buffoonery in early scenes are the same cunning lot who, by the end of the production, successfully turn the tables on their white tormentors and seize control of the plantation.

The issue of race is eternally a touchy, sensitive matter. But it does make for an exciting talking point in works of art, including theatrical productions (particularly ones like White Witch) that are real and make a strong point while confronting a difficult, controversial subject.

And do I even need mention that anything with the name Annie Palmer attached to it is bound to spark controversy?

Email ThisBlogThis!Share to TwitterShare to FacebookShare to Pinterest
Labels: 2011 Actor Boy Awards, Commentary, Do I Smell a Controversy?, THEATRE SPECIAL