2011 TONY AWARDS: 'Book of Mormon' leads the pack with 14 nominations 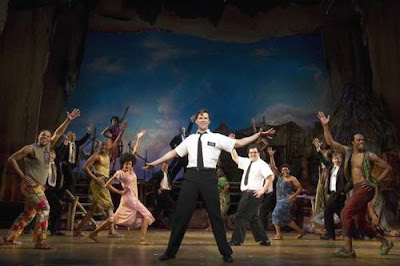 The Book of Mormon, a daring musical comedy about Mormon missionaries in Africa, has been nominated for a leading 14 Tony Awards, potentially making it the most celebrated Broadway show since The Producers won 12 of 15 nominations a decade ago.

The show from Matt Stone and Trey Park, the creators of television's animated satire South Park and the previous Broadway hit Avenue Q has garnered critical acclaim and sold-out houses, with top critics like the New York Times' Ben Brantley calling it "old-fashioned" and "pleasure-giving."

Mormon is followed by The Scottsboro Boys with 12 nominations for the musical based on the 1930s case in which nine black men were unjustly accused of attacking two white women on a train in Alabama.

Two musical revivals followed: Anything Goes gained nine nominations, led by Best Actress nominee Sutton Foster, and How to Succeed in Business Without Really Trying had eight, though not for star Daniel Radcliffe of Harry Potter fame. Shakespeare's dark comedy The Merchant of Venice gained seven nominations, including a Best Actor nomination for Al Pacino as Shylock.

The South Africa-based Handspring Puppet Company will receive a Special Tony Award for its puppetry work on the production of War Horse, based on the children's novel by Michael Morpugo. War Horse received four nominations, including direction and scenic design.

The 2011 Special Tony Award for Lifetime Achievement will be awarded to playwright Athol Fugard and Philip J. Smith, the chair of the Shubert Organization, America's oldest professional theatre company.

Matthew Broderick and Anika Noni Rose, best known for her role in the Broadway production of Caroline, or Change, announced the nominations at Lincoln Centre on Tuesday. The Tony Awards, which annually salutes Broadway's finest, will take place at the Beacon Theatre in New York on Sunday, June 12, and broadcast live on CBS. Nominees were selected by a 22-person committee, while the winners in 26 categories will be selected by 824 theatre professionals.