BRIDE ON BOARD: These ‘Bridesmaids’ make for swell road-trip companions 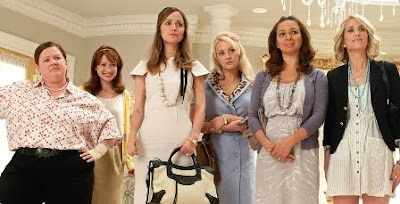 THE GANG: The cast of Bridesmaids proves women can be just as raunchily funny.

It was only a matter of time before Kristen Wiig made the leap from wonder comic on Saturday Night Live to big-screen comedy sweetheart and screenwriter. Hugely gifted as she is, Wiig has the ultimate blueprint in Tina Fey for successfully charting such a course. With the exception of height and, perhaps, time in the biz, not many factors separate the two women, who are as naturally funny as the work they produce. Fey scored a critical and commercial darling with the sly, amusing Mean Girls, her debut script, and this month Wiig arrives with Bridesmaids, a wildly hilarious and sharply observed female buddy-comedy that transcends formula and wisely side-steps cliché.

Loosely described as The Hangover with women, Bridesmaids terrifically captures the beauty and challenges that come with a solid friendship. More obviously, though, it’s about how much more freakin’ fun bridesmaids seem to enjoy. The whole thing is mired in a wonderful spirit of explorative adventure melded with sisterhood bonding and the inexplicable tendency to discover love lurking in the most unexpected of situations.

Lovelorn former cake-shop proprietor Annie (Wiig) has been BFFs with Lillian (Maya Rudolph) since adolescence, and their friendship comes full circle with Lillian’s upcoming nuptials with Annie as maid-of-honour. But that’s also when, for the first time it would seem, the girls’ relationship hits a rough patch, heightened when another of Lillian’s pals, the uptight, posh Helen (Rose Byrne) enters the picture.

Smartly directed by Paul Feig, Bridesmaids boasts laugh-out-loud funny dialogue in a clever script and an appealing, engaging central character in Wiig’s Annie, whose inexorable predicaments and cul-de-sac love-life never fail to amuse. That Judd Apatow serves as a producer on the film should be fair warning as to the content in store; the filmmaker is not exactly known for sterilized, family-perfect comedies. As such, the regular spurts of vulgarity and frank repartee do not surprise, but actually serve to ratchet up the film’s humour quotient without putting you off. Still, there are no saintly Madonnas in this picture; Lillian’s bridesmaids are anything but well-behaved, especially when the girls hit the road to bond before the big day.

Wiig demonstrates a gift for spiky, sexy comedy, making it quite easy to grasp why she quickly became such a hit on SNL. She enjoys an effortless chemistry with Rudolph and Chris O’Dowd, who plays a charming cop-with-an-accent that crosses her path. Though in a less showy role, Rudolph also has her bright moments. And even John Hamm, who appears in a few scenes as Annie’s doucheboat lover, elicits chuckles, as does the rest of the large ensemble.

Proof that women writers (and actors) can deliver convincingly in the choppy waters of the crude and raunchy, Bridesmaids is sharply penned and occasionally tender. Overall, it’s ferociously funny. (Tyrone’s Verdict: A-)