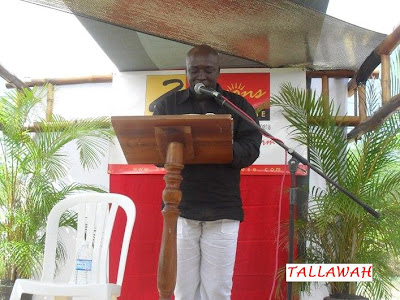 THE READER: Ellis entertains the audience with excerpts from his novels.
At the Talking Trees Lit Fiesta in St. Elizabeth on the weekend, the audience warmly received a rather enthusiastic reading from Jamaican novelist Garfield Ellis, who shared passages from two of his novels, ’Til I’m Laid To Rest and For Nothing At All, entertaining tales of Jamaicans at home and elsewhere. He later spoke to TALLAWAH about his writing life, influences and the gist of his next work.

’Til I’m Laid To Rest, your latest novel, is an immigration tale set in the US. What made you want to explore such a topic?
Well it’s a story that pretty much had to be told because it is something I know very well, and while in the United States I have encountered quite a few people who also immigrated.
What area of the United States is that?
In Miami.
Tell me a bit about your writing life. What’s the process like for you?
I tend to write in the mornings. I get up early like, say, between four and six and write.
Is this a daily routine?
As much as I can, and then I go to work.
Oh, what is the nature of that work?
I am the director of communications at the Jamaica Anti-Doping Commission here in Jamaica. But I still live between here and Miami.
How do you establish a balance in your busy work life?
It’s not difficult to balance. What happens is that you write a lot and then you market the book as much as you can, because you have to make a choice.
What will your next book explore?
Well, actually I just finished a novel that is called The Angel’s Share. It’s about a father and son who basically find each while in St. Elizabeth.
Share some of your literary favourites and influences.
Some of the writers who have influenced me over the years are people like James Mitchener, Toni Morrison. Toni Morrison’s Beloved is one of the best books ever written. I also enjoyed Bronte’s Wuthering Heights and, of course, Tom Sawyer, The Adventures of Huckleberry Finn, Great Expectations and so on. These are the kinds of great books that you read over and over. And then there are newer books like The Bourne Identity from the Bourne series.
Are there any particular titles inspiring you this month?
Well, currently I am writing a lot, and when I am writing I don’t read as much; I just focus on the work.

Publishing panel discussion: Getting your work out there 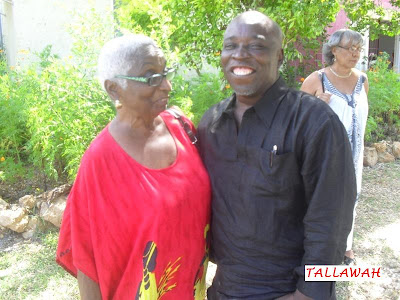