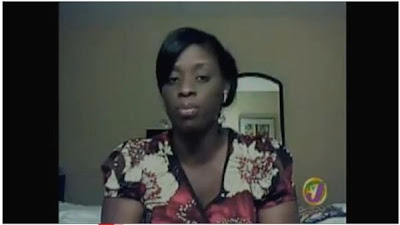 STANDING HER GROUND: Spence is in the business of getting on with life.
Latoya Spence had always enjoyed a fairly drama-free existence as a journalist, that is until a working trip to Florida this past February to cover the Buju Banton drugs-and-guns trial in Tampa became a real-life personal nightmare, involving a visit to a particular clothing store, shoplifting (petty theft) accusations, and the arrival of the police. (You’ve heard the story, but if you’ve been stranded in Siberia for the past several months catch up on the deets here.)

Now, the Television Jamaica (TV J) staffer (known for the thoroughness and incisive nature of her reporting) still maintains her innocence, and is eager to set the record straight and clear her good name. TALLAWAH ended up having an impromptu phone conversation with Spence earlier this week -- (how the chat came about is one of life’s great mysteries) -- during which we very briefly touched on her unfortunate legal saga and the impact it’s brought to her life.

By her own admission, the past few months have been a particularly taxing period for her and the family, to say the least. “The trauma my husband and I have faced is nothing easy to talk about. My kids have been crying and don’t want to go to school because cruel children of cruel parents have been teasing them. It has been really bad,” she said, while making abundantly clear her disappointment in the general public. “I am more angry at the Jamaican public for just taking a few bits of information and just running with it, twisting it into something that can destroy people’s lives.”

Ever since the story of Spence’s ordeal in Florida broke, spreading like a California wildfire on blogs and social networking websites, her employers at TV J have not wavered in their commitment to protecting their employee. So if you’ve been wondering what Spence has been up (haven’t seen a news report from her in a minute) she’s been back at work, while awaiting documents related to the case from overseas. “Yes, I’m still at work. I am talking to you from work,” says Spence, who turns 31 in August. “But from an RJR perspective I am not at liberty to share any details on the case or grant any major interviews. Right now I am waiting on the legal documents to say that this has all been squashed, and then you can be free to have a sit-down with me.” I might just take her up on that offer.

Have your say: What's your view on the Latoya Spence saga, dear reader? Post your thoughts in the Comments.

Email ThisBlogThis!Share to TwitterShare to FacebookShare to Pinterest
Labels: Do I Smell a Controversy?, Jamaican TV, TALLAWAH Exclusive