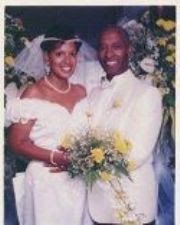 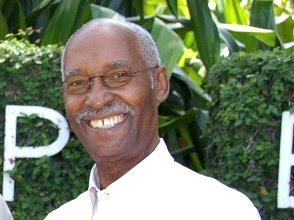 'TILL DEATH: Binger and Samuels' wedded bliss (above); Binger in happier times.
The many Jamaicans who tune in to the nightly news on TV J would have noticed that a regular face is conspicuously absent from their screen. It’s been a little under two weeks since enduring anchor Dorraine Samuels has been away from her chair, deeply mourning the death of her beloved Karl Binger, the actor and tourism exec, who passed away on Sunday, May 8, after a lengthy illness.

Binger, who served the TPDCo, the Nature Preservation Foundation and the Urban Development Corporation for several years, was in 2002 awarded the Order of Distinction, Jamaica's fifth highest civic honour. The Jamaican arts community, however, knew Binger (a Calabar old boy) best as a stage actor who appeared in such memorable productions as the 1962 national pantomime Busha Bluebeard, and other popular works like the Trevor Rhone classics Smile Orange and Old Story Time.

To be close to relatives in this time of bereavement and tend to funeral preparations, Samuels, TV J informs, has taken an indefinite break from her broadcasting duties. “She is actively grieving, so she has taken a few weeks off to make preparations for her husband’s funeral,” shares a spokesperson at the station.

Binger is also survived by 6 kids, stepchildren, grands and other relatives. The thanksgiving service for his life will be held on Friday (May 20) at the Webster Memorial Church, Half Way Tree Road. A donation will be taken up for the church outreach programme and the Jamaica Cancer Society. Cheerful colours are being requested.