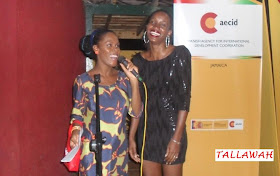 SHEER RADIANCE: Jarvis-George (right) soaks up the warm reception for her screen debut. At left is RFF emcee, Amber.

Featuring an attractive pair of lovebirds, Dinner is a sweetly poetic and vivid 12-minute verse-to-screen clip from an Antiguan writer/director with an appealing, if slightly provocative, voice. It’s a small film with a big heart that explores intimate love, employing a slyly clever approach – cloaked in the guise of meal preparation. While getting dinner ready a radiant young lady (played by Jervis-George, who also provides a lyrical voice-over) is surprised by the early arrival home of her virile Rastafarian man, and before you can say ‘Come and get it’ a dining of a totally different variety plays out on-screen. Shot in vibrant hues by a surprisingly steady camera, Dinner is romp that ends all too quickly, but it was tastefully delightful while it lasted. B

It’s not at all hard to conclude that Jamaican animation filmmaker Reinardo Chung is intrigued by the gun violence that plagues his homeland; it’s a hallmark of his projects, including Spirit of Jamdung, but especially his intensely thrilling animated short Bad Influence, which was screened opening night. But, at the very least, if there is a singular message that Chung aims to convey it’s that crime never truly pays. The set-up of Bad Influence is pretty routine, centred on a group of gun-armed gangsters who carry out a robbery with dire consequences, as the mission goes off on a disastrous tangent. That the message does not become entangled or, worse, lost, in the dangerous mess that we witness is a testament to Chung’s assuredness of his art. B+

The documentary Holding On To Jah casts a rather wide net, tracing and examining Jamaican, reggae and Rastafari history from as far back as the Africans on the Middle Passage to the birth and ascension of icons like Bob Marley, with equal verve and a sense of thoroughness. It’s a wonderfully filmed and largely engaging project laced with an encyclopaedia’s worth of musical facts, and featuring a series of in-depth interviews with a who's-who of industry stalwarts, including historian Roger Steffens, the reliably enigmatic source of little-known truths about the evolution of reggae and Rastafarian culture. But the real selling point of Holding on to Jah (the brainchild of an American team, might I add) is the overall melding of insightful commentary with revelatory details, coupled with amazing shots of outdoor Jamaican life. A-

Also screened: Vision of Paradise, a concise, frequently amusing meditation on the mystique and musical enchantment of The Upsetter himself, Lee ‘Scratch’ Perry.