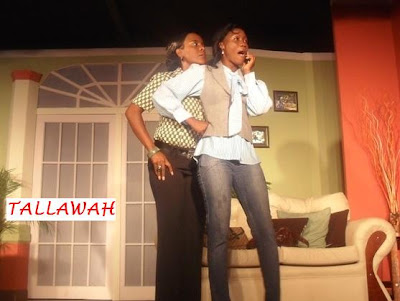 In its search for depth and scope, Big Tree, Small Axe attempts to cast a munificent and keen eye on themes as varied as brow-raising intimate relationships, big dreams and long-existing family skeletons, but such a lofty goal proves elusive as the play falters in essential areas to make it soar, most notably the astuteness of a winning script and the requisite emotional heft. But it’s not all bad news: the set is great to look at, with its vivid hues and glossy sheen intended to reflect the well-off status of its inhabitants. Under the lights, the stage is glittery and inviting.

But substance-wise the comedy-drama is only sporadically entertaining, sometimes moving at a leaden pace and experiences very little luck at escaping cliché. Taking place in well-to-do upper St. Andrew, Big Tree is centred on an odd couple – a naïve young status-seeker called Gabby (Lakeisha Elliston) and the disagreeable, controlling Lanny (Volier Johnson), the older man who has taken her from crayons to perfume, earning her unwavering loyalty. The large age difference is the least of the issues that trouble the relationship, as accusations of infidelity and possible abuse are thrown into the mix.

Gabby’s longtime girlfriend Kayla (Silvera) brings some crackling energy to the whole thing, with her outspoken self and fiery, untameable energy. And, yes, she despises Lanny, but not out of jealousy; she is more concerned about her friend’s well-being in the relationship, a worry shared by Gabby’s mother (Thompson), the diligent, longsuffering housekeeper. Rounding out the cast, Titus (the writer/director) has the small part of Oral, a giddy aspiring singjay.

Despite moments of genuine humour and flashes of chemistry, the story fails to reward viewers with any major revelations about human relationships or any real feeling – or allow the actors to achieve much in their roles. So while they hold our attention here and there, they never quite bring the characters into complete, convincing existence. A notable exception though is Silvera, who is the best thing about the play, ever doing her best to harvest something substantial out of an otherwise limited role.

While not a complete disappointment, for what it’s worth, Big Tree, Small Axe is best regarded as a sketch of things to come. Tyrone’s Verdict: C+