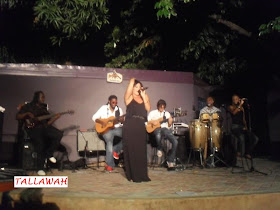 SHOW GIRL: Tessanne works it out with her band.
By the time Tessanne Chin launched into a jazzy, reggae-tinged rendition of Adele’s “Rolling in the Deep” Thursday night at her Red Bones concert, as members of the sizeable crowd some of us wondered, I’m sure, if the show could deliver any more such delightful surprises. Then, like a born mind-reader, for her encore performance Tessanne broke out the Bob Marley canon for a wonderful take on “Concrete Jungle.” (Besides this week marking the 30th anniversary of Marley’s passing, the singer clearly knows that you can’t go wrong with a Bob Marley.) It was a moment bearing ample proof of what many have known from the start: Tessanne can sing anything and make it gleam. And with a plush, colourful voice like hers, the listening is an experience that takes you adrift in time and experience.

Dressed in an all-black ensemble, perfectly matching her long, jet-black hair, Tessanne kept the musical magic alive for nearly two hours, breezing through her popular hits like “Messenger” and the timeless smash ballad “Hideaway,” as well as such lesser known gems from her debut album, In Between Words, as “Taken,” a haunting ode to love deffered that saw the singer effortlessly hitting some incredible, sky-reaching notes, and “Flying High,” which she dedicated to the world’s ‘superwomen’.

In very much the same way that her sis Tami thrilled the packed courtyard some weeks earlier, Tessanne scored standout cover renditions of songs by artistes whom she deeply admires. As such, Alicia Keys’ “Unthinkable” (a dedication to the hubby), Pink’s heartbreaking paean to self-acceptance “Perfect,” as well as Michael Jackson’s “Dirty Diana” (remixed with a little Jessie J) brought the house (or, should I say, the open sky) down. And she sneaked in some Beres. But, of course, there is no way on God’s green Earth that the show would be complete without a performance of the breathtakingly beautiful duet, “You and Me,” with Tami. And out came the cellphone and video cams instantly to capture the remarkable performance, making for a thoroughly modern concert experience.

In the end, the show had the dual effect of leaving you feeling filled but quietly wanting more. That’s the real hallmark of a good meal. And it’s no shock, as Tessanne is possessed of an arresting voice, the requisite charisma and engaging stage presence perfect for live performance. Brava!

Watch Tessanne do a reggaefied take on "Unthinkable (I'm Ready)":