TIME & ‘TIDES’: Nothing extraordinary aboard this latest ‘Pirates’ 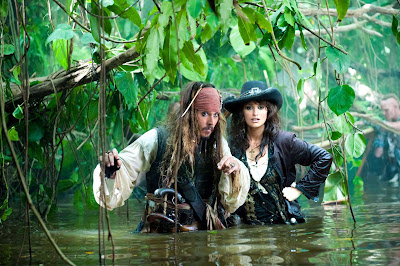 TREASURE HUNT: Depp and Cruz are on a quest.

Judging by the mammoth opening-weekend box-office haul (more than US$90M), it’s quite obvious that folks are exhilarated that Captain Jack Sparrow (Johnny Depp) has made a return voyage to theatres for the fourth instalment in the mega-triumphant Pirates of the Caribbean franchise, subtitled On Stranger Tides. But there’s nothing remotely out-of-the-ordinary or distinctly refreshing about this latest Pirates, as Sparrow and the gang of usually ardent seafaring treasure-seekers reprise their swashbuckling roles with mind-numbing familiarity.

Under Rob Marshall’s direction, On Stranger Tides finds Depp’s Sparrow on a quest to locate the storied Fountain of Youth, crossing paths with the beautiful but dangerous Angelica (Penélope Cruz), with whom he shares a mysterious past. However, he can’t be sure if it's love that has brought her back into his life or if she's just a ruthless scammer using him to find the fabled Fountain. When she forces him aboard the Queen Anne's Revenge, the ship of her father, the legendary and terrifying pirate Blackbeard (Ian McShane, in a terrific outing), Sparrow finds himself on an another eventful adventure that can only lead to comical disaster.

It’s chock-full of noisy sword-clashing and vicious mermaids, and is occasionally awash in the magical realism and shades of sorcery that the Pirates franchise has become known for. Overall, in spite of an uninspired script and bland acting (McShane is the sole standout), there are some genuinely droll moments. But, as a whole, the film is a frustratingly inconsistent exercise that soon enough has you yearning for dry land. Tyrone’s Verdict: C+