WOMAN ON THE GO: It’s hard keeping up with livewire actress Audrey Reid 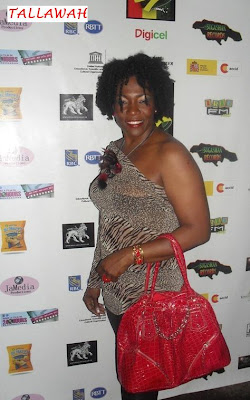 BAG LADY: Reid is on the move in her professional life.

Audrey Reid stays busy. This year alone, the vivacious actress and mother wrapped a series of performances in the revenge stage drama Judgement, filmed new episodes of the TV family sitcom Mi & Mi Kru and has now reprised her role as one of three judges on the new season of Tastee Talent Trail, while getting set to fly off to England in June to star in an as-yet-untitled Jamaica-inspired film.

Speaking of movies, it’s only right that the Jamaican performer who wowed critics and international audiences with strong turns in Dancehall Queen and Third World Cop gets to refresh her presence on the big screen. “I head off to London next month for this new movie. There aren’t many details to talk about now because the contract is still to be signed,” Reid explains in an exclusive chat with TALLAWAH at the Reggae Film Festival. “But it’s a story about a Jamaican mother who goes to London and ends up struggling with her kids. It’s one of my new projects I hope will do well.”

One thing that’s been doing well is the Tastee Talent Trail, the long-running televised talent contest, which, Reid reveals, has become a ratings powerhouse for CVM. “Naturally, the ratings have gone up, and the experience is just a whole lot of fun,” she says. “People look forward to the criticism from the judges. Many people say they watch to hear what the judges are going to say. It’s weekly entertainment.” With Reid in the thick of things, of course it is.

Posted by TALLAWAH Magazine (tallawahmagazine@gmail.com) at 12:32 am