His brilliantly hued abstractions has garnered him much acclaim, but you would be hard pressed to find a form of visual expression on which Gerard Hanson hasn’t bestowed his vision and painter’s flair. Working mainly in acrylic and mixed media, each aspect he approaches furthers his aim of bringing art into everyday Jamaican life. This month, the emerging master is celebrated with an exuberant solo exhibition at the Mutual Gallery and Art Centre, “Fashioned Realities.”

Highlights of the month-long exhibit range from Hanson’s illuminated depictions of primping inner-city women and moderately style-conscious men to austere images capturing the beauty and haunting mystery of nature. Neither pretentious nor intimidating, Hanson’s work encourages easy discourse, but that’s not to say the artist shies away from compellingly challenging the viewer with a vivid focus on the realities that characterizes life in the Jamaican ghetto, but especially downtown Kingston, where he has set up a thriving studio.

Meanwhile, according to the Mutual Gallery, the solo exhibition forms part of the prize package Hanson was awarded when he emerged the overall winner of last year’s Under 40, an annual contest that seeks to encourage new forms of expression among resident and non-resident contemporary young Jamaican artists. “Through the Under 40 contest we aim to promote creativity in our artists and provide encouragement for them to continue working after art school or in whatever field they find themselves.”

As for his work, Hanson, who is of Jamaican and Irish parentage, explains that the incredible contrast in his foreign experiences and Jamaican roots largely informs the richly textured range and polychromatic palette he employs. “To suddenly arrive in Jamaica was amazing,” says Hanson, who was born in West Yorkshire. “The utter contrast of my two worlds colliding hit me like a ton of bricks! And it has had a huge effect on the colour, light and sheer exuberance of my work.” 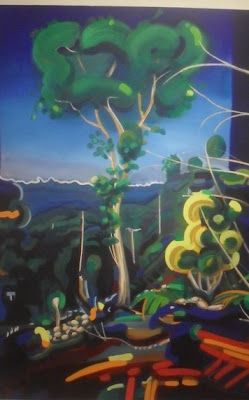 COLOUR ME STUNNING: Hanson's "Cedar Tree" and "Pauline" on view at the Mutual Gallery.

Email ThisBlogThis!Share to TwitterShare to FacebookShare to Pinterest
Labels: Art On Display, New Exhibits, Ones To Watch