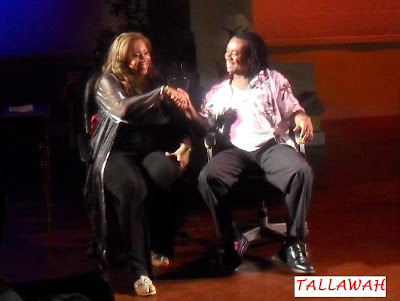 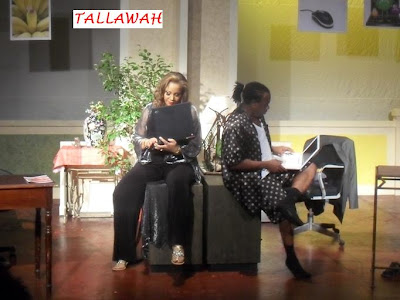 THE 'NET FACTOR: Gonzalez and Brown look for love online.

There are those for whom loneliness is a fundamental aspect of the human condition. But if the new production E-Love is to be believed, you’ll always have a friend in online dating and its plethora of possibilities. The lighthearted two-hander musical comedy, which opened last weekend at The Theatre Place in New Kingston, closely follows Frank (A.J. Brown) and Carol (Carol Gonzalez), two lonely souls lamenting their romance-free situation to the point of pathetically wallowing in self-pity.

Both successful professionals (he an accountant, she a restaurant staffer) in their 50s, they soon realize that while it might appear that viable romantic options for people of a certain age are limited, it doesn’t always have to come down to throwing in the towel on your love life. As fate would have it, one Saturday night, from the comfort of their homes, Frank and Carol forge a connection via a matchmaking site, bonding over an appreciation for vintage music and witty repartee. But the newly excited pair eventually uncover too much information about each other when they decide to swap pieces of their individual romantic histories. Don’t you just hate when that happens?

The non-traditional move by director Pablo Hoilett, adapting a script by Wayland Rickard, to cast professional singers in the roles surprisingly serves the production in more affirmative ways than not. For one thing, besides lending the numbers a lustrous shimmer, the acting comes in for much commendation. Gonzalez understandably has her frigid moments, but for the most part she plays Carol with a striking mix of sass and sweetness that sets off Brown’s brio and naturalness.

The writing is mostly clever and thankfully there is some degree of unpredictability to the whole thing, in addition to the presentation of two well drawn characters who just happen to be caught in a romantic cul-de-sac. On the other hand, when it comes to the light, catchy musical numbers (mostly duets), the songs sometimes unfold in too rapid a succession (particularly in the second half) that begs for the injection of longer breathing spaces. Meanwhile, the set design, depicting the modestly well-to-do quality of life of the characters, coupled with the up-to-par lighting, contributes effectively to the wholesome overall look and wide appeal of the play.

Ultimately, E-Love, though it doesn’t always avoid schmaltziness, is a pleasing musical comedy with heart and passion that reminds us, whether we choose to admit it or not, that in life we constantly search for that thing called… connection. Tyrone’s Verdict: B