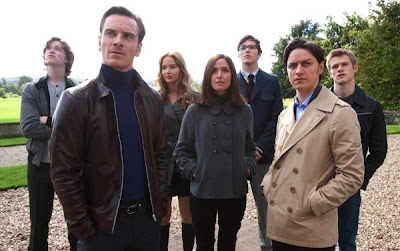 LOOK TO THE SKIES: The new class of of X-Men.

Perhaps the single most highly appreciative achievement of the latest X-Men film is how it strongly augments an understanding of the genesis of the franchise, most specifically the rise of the legendary animosity between mutant leaders Charles Xavier and Erik Lensherr, the friends-turned-foes who would eventually become known, respectively, as Professor X and Magneto.

In this prequel, which took the weekend box office with $56M, the roles are brought to full-bodied life with reliable depth and considerable nuance by James McAvoy (Atonement) and Michael Fassbenbder (Jane Eyre), who, ironically, are actors one doesn’t necessarily associate with this sort of high-octane big-screen adventure.

Action-packed, superbly written and prodded by stylish direction from Matthew Vaughn, X-Men: First Class is debatably the most incredibly enthralling film of its class since Christopher Nolan’s The Dark Knight. The best action movies usually deliver a winning blend of great fight sequences, smart dialogue, and, of course, scenes where stuff blows up. This X-Men doesn’t skimp on the good stuff, even honestly earning comparisons to the better James Bond pictures.

Against the backdrop of advent of the Cold War, the film vigorously delves into its origin saga, introducing a wild assortment of mutant types, led by the ruthless and powerful Sebastian Shaw (a fierce Kevin Bacon) who enlists a sturdy mini-army to help plot destruction. In a deeper backstory, it was Shaw who first brought out the worst in the young Erik/Magneto and led to the death of his mother in a Nazi camp, leading to the boy’s eventual transformation into a vengeful beast with Shaw as the prime target up for elimination.

The remainder of the cast, meanwhile, is also terrific, with sharp and memorable turns coming particularly from Jennifer Lawrence (Winter’s Bone) as Mystique; January Jones (TV’s Mad Men) as ice princess Emma Frost; Zoe Kravitz as Angel, equipped with a small but effective pair of wings, and Nicholas Hoult (as brainy, bespectacled Beast), the English actor best known for his roles in About A Boy and A Single Man. Rose Byrne and Oliver Platt also show up, playing human agents working together with Xavier and his team.

Pity there are no appearances from series regulars Jean Grey, Storm, and Cyclops (Hugh Jackman’s Wolverine pops up for a fleeting cameo in a bar scene), who all rank among the truly gifted mutants I’ve always had a keen interest in.

Still, X-Men: First Class superbly makes the case that a prequel can contribute positively to the reputation of its series as opposed to unleashing any undesirable effect (Hannibal Rising, anyone?). Tyrone's Verdict: B+