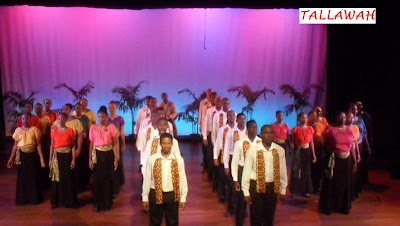 HIGHEST PRAISE: The University Singers take centre stage.
Sacred hymns, Afro-American spirituals and Caribbean folk gems are standard fodder for the University Singers, but much of the joy in attending the choir’s annual concert season on the Mona Campus resides in an anticipation of the show’s second half, which customarily features admirably inventive arrangements of popular tunes, contemporary or plucked from some fascinatingly memorable golden era.

This year, alongside medleys of refined dancehall tunes and modern-day blessings, rocksteady hits from the 70s seized the spotlight, among them refreshing classics by Dennis Brown, Phyllis Dillon and Marcia Griffiths given a modern-day gleam that had patrons, including His Excellency Sir Patrick Allen, our Governor General, positively rocking.

That the choir continues to diversify its repertoire with splendid results while staying true to an authentic Caribbean aesthetic (and satisfying a loyal following) is a testament to the visionary leadership of pioneering artistic director Noel Dexter and conductors Heston Boothe and Franklin Halliburton – and the lavish vocal gifts of senior and debutante choristers. And speaking of the first-timers, special mention must be made of newly-recruited tenor Orane Thomas, who has not only proven himself a standout vocalist but an attention-worthy soloist, displaying control and engaging stage presence during his solo on the gorgeously rendered gospel selection “Jesus Is Love.”

As with any University Singers recital, the highlights are numerous. Playing gossiping church sisters, divine sopranos Althea McKenzie and Carolyn Reid-Cameron had us in their histrionic thrall with a lovely duet of “Ride De Chariot,” arranged by Halliburton, who it seems likes a little humour with his music. Meanwhile, a suite of Buju Banton hits (“Destiny,” “Murderer,” “Magic City”…) reimagined by the ever-reliable Djenne Greaves, as well as a set of African songs arranged by pianist Kathy Brown, also come in for high praises.

But solos and fascinating arrangements aside, nothing tops the mesmerizing blend of voices, steeped in heavenly harmonies over a range of instruments, that ever primarily characterizes a performance by these singers. Whether they are tackling classical, religious and folk, or experimenting with everything from pop to soca, you are never less than awed.

The 2011 concert season by the University Singers continues at the Philip Sherlock Centre, UWI Mona, through June 26. Tickets: 702-3518. 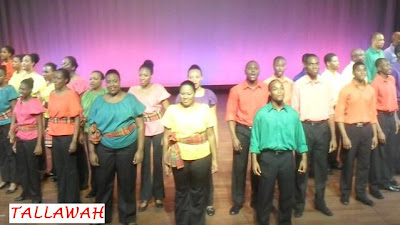