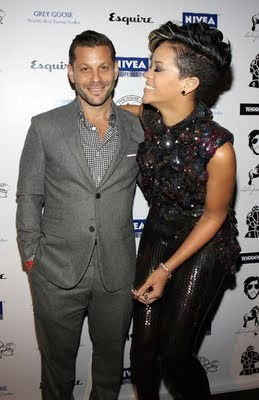 STAR QUALITY: Mandler and Rihanna, artist and muse.
Over the course of his career, commercial and music video director Anthony Mandler has grown accustomed to his hauntingly beautiful film work revving the engine of the international public, but not even he was prepared for the backlash that has surrounded his latest creation, the video for “Man Down,” (which was shot in May on location in Portland, Jamaica) performed by pop star Rihanna, his most notable and frequent collaborator.

While there are those who applaud the duo’s fearlessness in tackling a difficult, hot-button issue, many have condemned the five-minute video, describing it as “inexcusable,” “overtly violent” and “condoning murder.” But if you ask Mandler, who has also helmed Jay Z’s “Run This Town,” Beyonce’s “Irreplaceable” and Drake’s “Find Your Love,” which was also set on the island, those who condemn the video have failed to grasp the true vision behind the whole thing.

Upon reading TALLAWAH’s analysis of the music video (and the surrounding controversy), posted last Saturday, Mandler shared his thoughts with me via e-mail:

I really appreciate your words and insight into the piece that I created. Critics are focusing on the obvious shock of "murder" rather than the true message which is about abuse. The world doesn't suffer from widespread murders by women retaliating for abuse. But we do have a global issue of rape and abuse of women. To focus on the murder is to turn your head away from the real problem and true message of the video...

One can only hope that society looks beyond the controversy so as to not loose sight of the real issue here.

From the desk of
Anthony Mandler

So there you have it. I sincerely hope Mr. Mandler’s explanation has clarified any lingering doubts about the purpose the “Man Down” video is intended to serve.

In the meantime, the 38-year-old director has his sights set on the big screen projects, as he is set to direct Die in a Gunfight for Media Rights Capital with Zac Efron attached to star. He is also signed on to direct for Summit Entertainment the vampire film Vlad, which is being produced by Brad Pitt, Dede Gardner and Jeremy Kleiner at Plan B Entertainment. 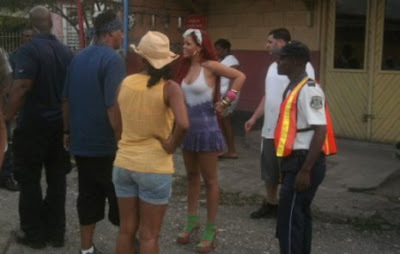 ISLAND SPICE: Rihanna (centre) on location to shoot the "Man Down" video in Portland.

Email ThisBlogThis!Share to TwitterShare to FacebookShare to Pinterest
Labels: Do I Smell a Controversy?, Readers' Writes