Ghett’a Life Preview: What the trailer reveals about the issues and characters at the heart of the film 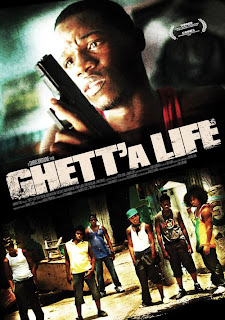 Ahead of the July 29 world premiere for Ghett’a Life, the film’s vibrant, crisp-looking trailer sheds some light on key plot points, chiefly the conundrum facing young Derek (newcomer Kevoy Burton), the fiercely driven central character with a dream of becoming a national boxing champ, much to the distress of his protective parents, in the face of the terrible struggles afforded by life in the ghetto.

Elsewhere in the 3-minute clip, there’s a strong look at the the grip of two-party politics on the poor (sharing at least one thing in common with Storm Saulter’s Better Mus’ Come) and ruthless innercity donmanship, with Chris McFarlane appearing as a brutish gangster. And what of the rest of the film’s supporting cast? The trailer does reveal a host of familiar faces like Winston ‘Bello’ Bell (currently on stage in Stop Dat Train), Lenford Salmon and Teddy Price in smaller parts.

In its exploration of everything from crime and family to the devastating effects of political tribalism on home, community and country, writer-director Chris Browne’s latest doesn’t sugarcoat the gripping violence that so often forms part of life in the downtrodden Jamaican innercity. And while the notion of criminals (and politicians) wreaking havoc on the lives of civilians is hardly novel to Jamaican cinema, the decision by Browne (who previously handled bloodshed on screen with Third World Cop) to tell the story against the backdrop of competitive sports, youthful determination and teenage angst bears some degree of fresh, inspired originality.