IN THE HEAT OF THE 'NIGHT': Mackie and Washington excel in Tanya Hamilton’s brave debut 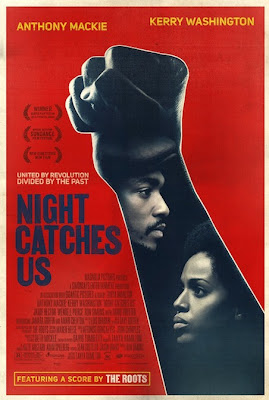 POWER & RESPECT: A new filmmaker takes us back.

“We don’t talk about the past; it’s too painful,” confesses one of the central characters in Tanya Hamilton’s Night Catches Us. But this compelling film, grounded in family loyalty, activism and community, derives much of its urgency and significance from a profound exploration of an important era in Black history. Indeed, a question that drives much of the story here is ‘In moving forward, can we truly leave the past behind?’

Night Catches Us (2011), writer-director Hamilton’s debut, is centred on fleet-footed Marcus (Anthony Mackie) and nurturing, headstrong single mother (Kerry Washington), who reunite in the down-on-its-luck Philadelphia community where they grew up and fell for each other at the height of the Black Panther Movement of which they were active members. It’s 1976, and Marcus is returning to the neighbourhood a decade after an ugly incident forced him to skip town. It’s a bittersweet homecoming, as his visit, spurred by his daddy’s passing, warms the heart of his old flame, but irritates old enemies (including Jamie Hector as a bar owner with a longheld grudge) who want him gone.

If there’s one point Hamilton brings across, it’s wrapped in the wise old adage that the more things change the more they stay the same. Ten years have rolled by since Marcus left the neighbourhood, yet much of the pain and paranoia he knew still lingers, and his return seems to coincide with the reopening of old wounds, encompassing antagonistic black-white relations and violent clashes between police and civilians.

Essentially, Night Catches Us is a small period story with broader social and political implications. It’s hard to escape the work’s relevance, and the stars respond with strong, layered portrayals, particularly Mackie, who imbues Marcus with a quiet strength and an ocean of dignity. Washington glows, sporting a plush afro that sets off her exotic cheekbones and a luminous complexion that seems to radiate light. It’s ideal casting, pitching together two talented actors who first shared on-screen chemistry in Spike Lee’s 2005 hit She Hate Me.

The pain and raw emotion is endlessly palpable, heartbreaking even, but Hamilton’s film (backed by a compelling score by The Roots), in bringing a storied piece of Black history to full life, is equally hopeful and illuminating buoyed by an assuredness that doesn’t always characterize the work of first-time filmmakers. Tyrone’s Verdict: A-

Posted by TALLAWAH Magazine (tallawahmagazine@gmail.com) at 11:54 am