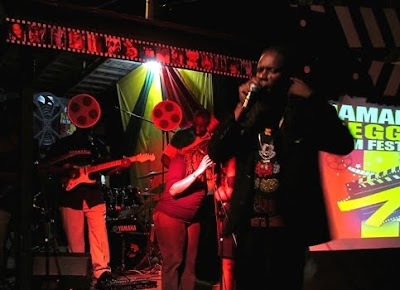 REGGAE HEALING: Keke-I takes the spotlight.
“Wa Wood”, a new mento song with the saucy lyrics in the tradition of the old-time Jamaican riddim performed by fresh-on-the-scene singer KeKe-I at the recently-concluded Reggae Film Festival, captured the attention of the packed Studio 38 audience attending the final night of the festival. With this song, KeKe-I has somewhat revitalised a forgotten rhythm and musical style, accomplishing a departure from the norm of everyday reggae releases. The live performance had guests on their feet dancing, and the energetic seven-song show received resounding applause.

“Wa Wood” is a mento-calypso ballad with humourous, double-entendre lyrics reminiscent of such old hits as “Healing in the Barn Yard” and “Rough Rider”. Produced by Dean Fraser (who accompanies the singer on both horn and harmonies) and recorded at Mikey Bennett's Grafton Studios, the track rides the revived popularity of mento as a Jamaican musical genre, and released by SugaShak Records of Mango Valley, St. Mary, it is the first by the artiste under a new contract with the record company, which also includes the upcoming release of a complete album.

KeKe-I was first recognized by Christopher L. Kaufman and Hailond Nottage of Sugashak Records, who later signed him to an artist management contract. With guidance from his new label, the singer has taken a departure from Jamaica's reggae norms, as can be heard on his upcoming album which showcases the roots of reggae in collaboration with some of Jamaica's finest producers and musicians. [Contact Sugashak: hailondn@yahoo.com; (876) 561-9684]

Email ThisBlogThis!Share to TwitterShare to FacebookShare to Pinterest
Labels: Ones To Watch, Reggae Film Festival