ON HIS MIND: Konshens comments on the current state of the music.
Over the course of his ever-expanding career, Konshens has rightfully earned critical acclaim and the respect of his audience and peers, primarily on the merit of his smart, largely introspective lyrics in songs that indisputably resonate across age and gender lines. A side effect of this newfound power, so to speak, is a surge in the entertainer’s outspoken nature. But history proves that his utterances are usually traceable back to his quest to make sense of a genre he cherishes – and wishes to see reach even greater heights.

According to the star’s latest observation, local recording artistes, but especially those in the dancehall, should place greater emphasis on championing indigenous Jamaican reggae, especially the one-drop rhythm that seems to be languishing in favour of a more high-energy, hip-hop-flavoured aesthetic. “As artistes we need to do more one-drop reggae because when you travel to Europe and other places you feel shame because you hear some reggae songs being played that you’ve never heard before,” said Konshens, midway during a performance at the Reggae Sumfest launch at Devon House on Wednesday. “So to the Rastaman them, let’s ease off the swaggin’ and get back to the roots of the music.”

Speaking with TALLAWAH after exiting the stage, the artiste put his comments into healthier perspective. “Reggae is the heartbeat; it’s still the dominant thing, but other countries are putting more emphasis on it than our own right now,” Konshens said. “Nothing is wrong with the high-energy approach in dancehall, but too much of the hip-hop and rap influence is not good.”

It’s solid argument, but Konshens hastens to add that he’s not trying to knock the hustle of another artiste embracing a prevailing American-esque approach to the music, as he himself is working to enter the international mainstream market in the tradition of Shaggy, Beenie Man and Sean Paul. For Konshens, who drops his first major studio album in August, it’s all about establishing a proper equilibrium. “I’m mixing it up and striking a balance between the high-energy dancehall and the one-drop reggae because I’m still trying to cross over.” 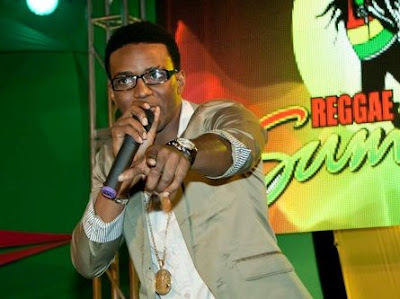 Posted by TALLAWAH Magazine (tallawahmagazine@gmail.com) at 11:23 am