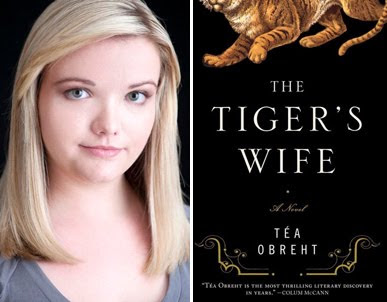 OUT OF THIS WORLD: Obreht cops a top award.

Back in March, we singled her out as one of the must-watch new stars on the literary scene, and now we are pleased to announce that Tea Obreht has won the prestigious Orange Prize for Fiction for her widely lauded debut novel, The Tiger's Wife.

The 25-year-old is the youngest ever author to win the 30,000 pound prize open to any novel by a woman published in English. The award was presented Wednesday night at London's Royal Festival Hall.

The Tiger's Wife is a story about a young doctor on a journey through war-torn Balkan countries inspired by stories her grandfather told her as a child. It was published earlier this year. Chairman of the judging panel, historian Bettany Hughes, praised Obreht (born in the former Yugoslavia but now lives in the United States) as "a truly exciting new talent."

Previous winners of the prestigious prize include Barbara Kingsolver and Zadie Smith.

Email ThisBlogThis!Share to TwitterShare to FacebookShare to Pinterest
Labels: Awards and Prizes, Buzz on Books, Literary Arts, Ones To Watch