ORAINE BARRETT on working with Rihanna, violence on film, and life as a top model 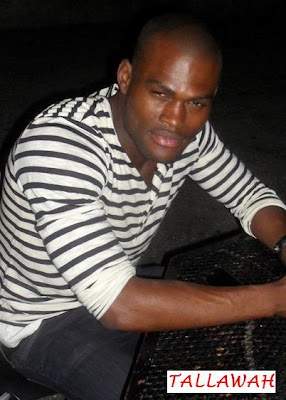 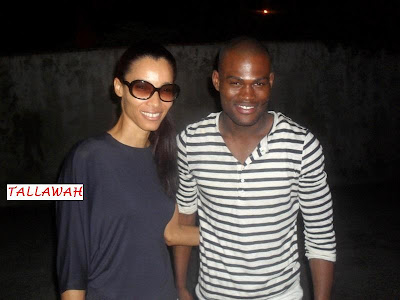 STYLE PROS: Barrett and Romae Gordon shot at Friday's CFW after-party.
Back on the island to walk in the couture shows at Caribbean Fashion Week and to reconnect with his roots, supermodel Oraine Barrett is garnering a different kind of fame these days as the central male figure in the provocative new audio-visual clip “Man Down” by fellow Caribbean stunner Rihanna. Below, the 26-year-old addresses the dissenting talk around the music video’s handling of violence – and shares his thoughts on the pop star’s ascent and what’s next for his career.

TALLAWAH: How did you land the job to play the male lead in the “Man Down” video?
Barrett: I was in New York, and I got the call from one of my agents at Pulse, and we both made an agreement that I would do the shoot. I was just fascinated by the idea.

TALLAWAH: What was it like working with Rihanna on set in Portland?
Barrett: It was awesome. Rihanna is on top of her game. To have shot with her was amazing. Artistically, it was very good for me, and I’m sure for her as well because as an artist you have to be very versatile. I thought that she did a tremendous job, and it was just a great atmosphere. I loved it.

TALLAWAH: For me, her rise to pop stardom has been just phenomenal.
Barrett: It has been great. She is in very high demand right now. Everyone wants to work with her, even though this video has a lot of controversy to it. But if people are talking about it so much it means there is something right about the video. So I guess that’s a huge plus for her, because being talked about makes you more visible in the media. It’s good for her.

TALLAWAH: When you discovered what the video’s storyline was, did you begin to anticipate the strong reaction?
Barrett: Yes, I knew there would be controversy because of the nature of it. But I feel that people should understand that it’s a video. Everything that is in it is basically fictional. And it’s up to the public to be aware of what’s going on. It’s correct; what you see in the video is a demonstration of what’s going on right now in Jamaica, in Barbados, in the Caribbean as a whole, and in the world. So a video of that sort is like any other movie: look at “Shottas” and all those movies. I understand the controversy, and I understand that Jamaican people are hurting because they want to get away from crime, and “Man Down” is in alignment with it, and they don’t want that. But, at the same time, it’s just a video.

TALLAWAH: In your experience, what is the hardest thing about being a top model?
Barrett: I don’t know. I just try to be myself at all times. There’s nothing hard to it. It’s all about the person, the individual, who you are, and so forth. So if you are the kind of person who is easily controlled by the attention or the media you can change overnight, and I don’t think I am being controlled by those things.

TALLAWAH: You’ve accomplished an impressive lot already in fashion modelling. What’s left for you to achieve?
Barrett: I don’t know what God has in store for me. But whatever that is I am ready to present myself in the most honourable way.

TALLAWAH: You appear so low-key and utterly modest. I hope it’s not an act.
Barrett: No, that’s me. I grew up in a small neighbourhood [Siloah, St. Elizabeth], and the people there are very cool. I learned to be humble, and I have carried that in a general sense. So my background has helped me to be the person that I am now.

TALLAWAH: You maintain a taut physique for your work on photoshoots. What’s your health and fitness regimen like?
Barrett: To be honest, I’m not a healthy eater, so I don’t like to give those kinds of tips. But every man is responsible for his own body; they know when something is wrong or when they need to work out. So I think it involves a lot of common sense. If your body is moving in a certain direction, you as a person have to modify that.

TALLAWAH: Give me a quick career overview.
Barrett: Well, my career has been steady, and I’m happy about that. I feel that God has been a tremendous presence in my life, and I’m happy for that. If it wasn’t for him, I wouldn’t be where I am today. I don’t know what the future holds, I cannot predict, but I would like to become something great.

TALLAWAH: I can just imagine how fiercely competitive it gets in your industry.
Barrett: It’s very competitive. In any industry you decide to be in it’s tough; it’s a challenge. It’s a competitive world, and the modelling world is no exception.
Also:
> Rihanna's "Man Down" controversy: Much ado about nothing?
> Anthony Mandler responds to TALLAWAH article on video backlash

Posted by TALLAWAH Magazine (tallawahmagazine@gmail.com) at 12:33 am