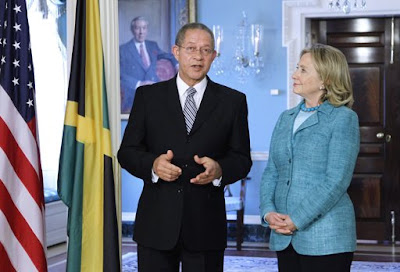 INT'L RELATIONS: PM Bruce Golding has dialogue with US Secetary of State, Hillary Clinton, at the State Department building in Washington on Monday.

Prime Minister Bruce Golding says the economic measures that his government has put in place are now bearing fruit and are set to put the country on a sound economic pathway. Delivering a lecture at the prestigious Brookings Institute in Washington DC on Tuesday, PM Golding pointed out that while Jamaica was experiencing economic growth in some areas, more needs to be done for the country to reap even greater economic success.

The PM told the over 200 participants that some of the measures put in place to help realize this objective include the introduction of debt exchange, measures to reduce crime, divesting Air Jamaica and the island’s sugar factories, along with the development of stringent economic programmes with support from the International Monetary Fund (IMF) and the World Bank.

PM Golding further disclosed that his government had instituted significant institutional reforms to create fiscal sustainability through legislation that will put serious restrictions on our deficit and accumulation of debt and move it away from just government’s decision and subject it to significant parliamentary oversight.

“I indeed want to go further and put it in the constitution and place significant limits with the provision that only in extra ordinary circumstances and with the approval of parliament can those limits be exceeded,” he said. "We have sought to consolidate government’s accounts and bring them under one Treasury Management System. This will allow us to have a clearer picture of our government accounts."

Golding disclosed that last month, a major programme of tax reform was tabled in Parliament and that January 1, 2012 has been set for the full roll-out. “After one year of intense work we have completed a major restructuring of the public sector. We have also embarked on a significant program of privatization. We are well advanced in the divestment of the government aluminum refineries and privatizing the Norman Manley International airport along with plans to privatize the management of the Port of Kingston,” he said.

The PM noted that he is trying to return the government to its essential core functions and to leave to the private sector those things that are more suited to private sector investment and management.

“The government is embarking on a programme of good governance, putting in place a number of critical measures because we recognize that this too is important in supporting our hopes and plans for economic development,” said Golding. “We have passed constitutional amendments to establish a new charter of fundamental rights and freedom. We have established an independent commission of investigation to deal with instances of abuse by agents of the state. We have legislation to criminalize breaches of the process by how government contracts are awarded.”

PM Bruce Golding who arrived in Washington on Sunday has so far held bilateral talks with the US Secretary of State, Hillary Rodham Clinton; President of the World Bank, Robert Zoellick; Deputy Managing Director of the International Monetary Fund, Naoyuki Shinonara and had an investment luncheon with US based high level investors. He will meet with the President of the Inter-American Development Bank (IDB), Luis Moreno, and officially launch the IDB Caribbean American Art Exhibition, where some six Jamaican artists are participating. 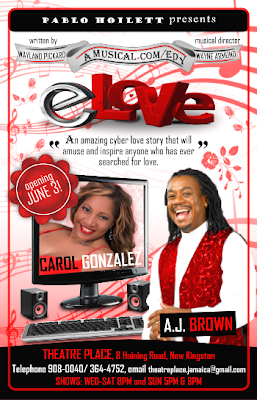